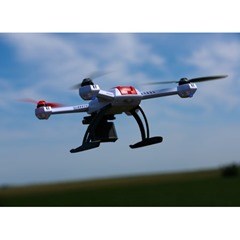 So a little while back I picked up a Blade 350QX, which is a ‘retail’, shade above ‘toy grade’ drone, or multi-rotor.   Out of the box this thing is pretty sweet for what it is.  Basically, it’s an out of the box, get you in the air and flying quad rotor, VTOL (Vertical Take Off and Landing) device (or Drone).   Though drone is such a nasty word at the moment.

I’m not going to review it here, there are plenty of reviews on the net.  If you’re interested just search.

Basically, out of the box the blade 350qz has 3 modes.

GREEN Mode, or ‘Simple’, which means it’s really easy to fly, maximum flight controller assistance, in fact you don’t even have to worry about orientation. (aka Beginner mode)

BLUE Mode, or ‘Stabilized’, which keeps it level if you let off the sticks but you still have to ‘fly it’ (aka medium mode).   If you pitch it 45 degrees, and left off the flight controller will bring it back level.

RED mode, or  ‘Acro’ short for acrobatic mode, which means you really have to fly it, keep it level, etc.  This is advanced or  pro mode, in this mode you can do flips, you can get this thing upside-down, which if you’re not ready for that, well it’s gonna crash.   In this mode if you pitch it 45 degrees and left off the stick it will still be at 45 degrees and likely falling out of the sky unless you counteract that pitch.

It has 3-axis stabilization in stabilized mode, gps assist in simple mode, no assistance in Expert mode.

If I’m not reviewing it why am I telling you all of this?  Here’s why.

If you’re fast on the mode switch, you can gain some altitude, do some flips, rolls, or what not, then flip it into Blue or Green mode and it will usually catch itself before it smashes into the ground.   I say usually because you have to set it up right, or at least it needs to know what’s what and certainly has to have GPS lock in GREEN mode.

About two months ago I was flying and having a great time.   I landed, swapped batteries, and as part of it’s initialization it has to get a GPS lock so it knows where it is.  It won’t ARM in green mode if it doesn’t have GPS Lock.   On that particular afternoon, the Blade wouldn’t get GPS lock.  It did previously for flights that day but during one particular run it wouldn’t.   Being impatient, I flipped it to Blue mode (stabilized), and armed it.   I figured, like my APM powered hex, it will eventually get GPS lock.   This appears to be un-true.

I flew it for a bit, then as confidence built, I took it up about 50 meters, and flipped her into RED or Acro mode.   Flipped it, then threw it into GREEN mode to save it.   Seems the Blade really needs to have GPS Lock for Green mode to be any good.  So from oh, about 35 meters, or 100 feet, she was upside down, and green mode, didn’t help.  It flew straight down, into the ground and the results were really bad. 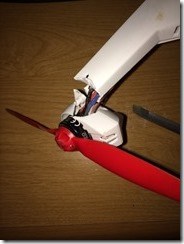 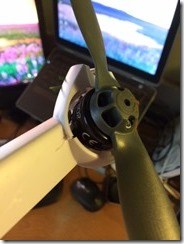 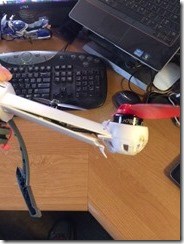 Now to Blade’s credit, all of these parts are obtainable, the frame, and what not.  The frame itself is $35, landing gear (of which mine were also broke) is $16, but as I assessed the damage, even the interior battery frame ($10) was also broken and it only got worse.  I will say that I didn’t lose a prop and that was exciting.   So I was looking about $100 in parts, maybe more.  The biggest issues is, the frames weren’t in stock anywhere.   They weren’t to be had.

So what to do?

I’ll tell you what to do, find an alternate frame.   I googled and searched, not a lot of people had done this or at least not had published anything if they had.   I did find one guy in China that migrated his to a DJI f330 frame and that’s what I decided to do.

So I hopped on ebay and found a DJI knock off Hong Kong frame for $15.00 so of course I ordered 2.   They took forever to get here.

DJI makes quality frame kits, but there are a plethora of knock offs.  DJI include integrated power management in the boards but since I was lifting a wiring harness out of the blade and onto something else that wasn’t needed.   Since this was also an experiment I though using the knock-off was fine.   I would not recommend a F450 or F550 knock off, the arms are not as good.

So the kits showed up and I began the transformation/transplantation. 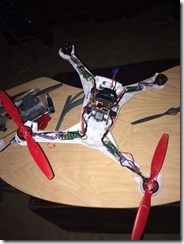 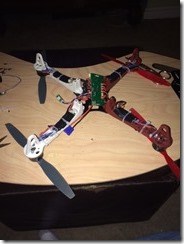 The Blade is held together with like 3 million screws, and when those screws go into plastic that’s no longer held onto anything it can make disassembly a bit tough.  During disassembly is when I discovered my battery frame was not just broken but completely unusable, and the switch on the flight controller was also broken, and unusable.  The switch is unfortunate, that’s a favorite feature of the blade.  I simply soldered the switch pads on the board and jumpered where the switch was.  Now, like the hex to turn of/off power you simply plug/unplug the battery.

I got things loosely migrated over, and actually hovered it in the office about a foot off the ground (not recommended).

Does it fly?  It sure does.   Is it optimal?  No.   I didn’t weigh the blade, or the transformed quad, but they feel about the same to me or close enough.

I took it out this morning.  It was really a little too windy for this thing.  Windy and very gusty.

It does fly, but it’s a little glitchy.   Every now and then it just dips or rotates.  I can’t really tell how much of that is the wind.   I also don’t have the flight controller permanently mounted, that will happen next.   Right now it’s kind of floating on all the wires between the plates.  It may be compass interference, though that’s mounted fairly well. 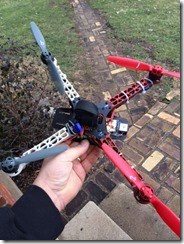 The top, the way it’s put together the battery is going on top. The Blade is a 350 meaning the props are 350mm apart. The frame is a 330 so there is very little room for things to be on top and to not get in the way of the blades (no pun intended). But it’s workable. 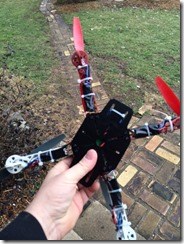 The motor mount holes on this frame to NOT line up. I had to dremmel the holes to open them up a little bit. I also only have 2 screws per motor right now. I’ll go back and fix the other holes later or look for an adapter which would raise the motors a bit and that would be good. 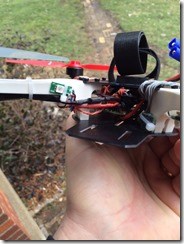 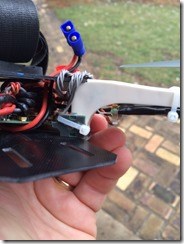 The back side showing the LED and compass locations. The compass is loosely mounted in the same orientation. I mean it’s fixed, but it’s not 100% the same, it’s rotated a bit, which was a worry but it didn’t seem to matter when I flew it. Maybe my ‘glitches’ are compass driven.

My plan now is to pop the top, and more permanently mount the flight board, and the compass, using sugru to hold them steady.   If the weather breaks soon, I’ll post some flight video.

Is it perfect?  No, if what you want is what you got when you opened the box, buy a factory QX frame.   But it flies and good enough for what I want it for and for the price of the frame I was able to buy 2 for the price of one QX350 frame so if I snap an arm, it’s probably a 10 minute repair. 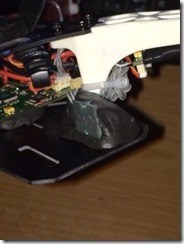 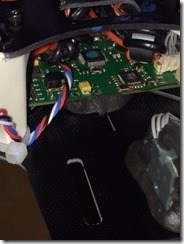 After the initial test flight, I tidied up the wiring, mounted the flight controller and compass in better locations using sugru.  This thing flies pretty good, not awesome, but probably 90% in GREEN, simple mode.  It has trouble holding altitude, it doesn’t fall, it kind of dips, now and then when the wind gusts, more than it should.

The last thing I need to do is move the LED’s, I can see the main one, but the ones on the arms aren’t real visible when you’re flying.

After flying this a few times, green mode kind of sucked, it would dip, struggle to hold altitude, etc.   As I rotated it in green mode one day it just shot up into the air, which got me thinking.

There was an issue with APM where if the barometer was exposed to direct sunlight or not covered well you’d get this behavior.   So I covered the board with moon-gel.   And wow, what a difference.   The Barometer is now not able to be hit by direct sunlight or wind, and it now flies like it did before.  Very happy with this conversion.