It’s been a while since I’ve done anything with my “Drones” or rather my multi-rotors.    I got pretty darn frustrated with the APM line of flight controllers as well as the PixHawk so I put it all down for a while and am slowly getting back in.

A few months ago I stumbled across a Tri-Copter frame with a Naze32 built in.  The two things I’ve liked most about this hobby, the Naze flight controller, and a tri-copter.

So dumped a TBS Discovery frame with DJI Flight controller on ebay and ordered one up.

Ideally, you can run all the cords inside the carbon fiber arms, but I had trouble getting stuff to fit, these carbon fiber arms are literally 1/2 as thick as the wood arms of my simple copter.  I also was at a loss for longer cables for the controller so I ran everything outside for now.   I’ll address that when I get new ESCs.

So basically, no, it’s not as clean as I’d like.

$137 for the tricopter-v3-kit, with Power Distribution board and Naze32 board is a pretty good deal.  I ended up buying some spare arms and a few other bits because I know I’m going to crash, including the server that David sells and recommends.

I already had: 3x Motors, 3x ESC’s, 3x Props, and a Spektrum Receiver, as well as the bits to make the power cord for the battery.

All in all it took about 4 hours from start to finish.   A bit longer because I did a lot of stuff twice trying to figure out how to extend things and what not.

David, the guy at RCExplorer who put this together has a couple GREAT Videos to walk you through the assembly.   Admittedly, setting up Naze isn’t easy for a noob.   But David makes it almost bullet proof to get off the ground.    I flew it for about 3 batteries today tuning it, and it flies GREAT.   Can’t wait to strap the GoPro to it and add some lights for orientation. 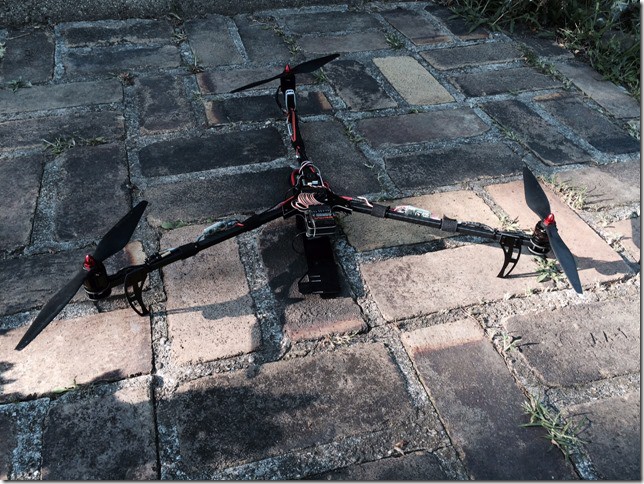 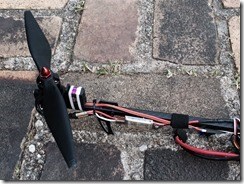 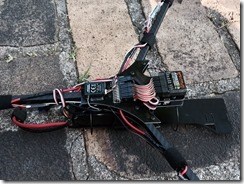 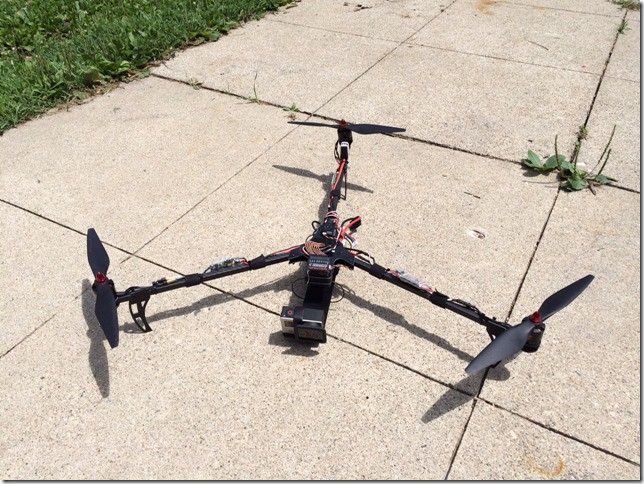 There is a purpose built firmware for this board, and an optimized version for tri-copters in general on a standard naze32 using cleanflight (instead of baseflight) and David gets you started with all the right settings.  His walkthrough video is very, very thorough.

Updated with some video of the first 2 camera enabled flights. 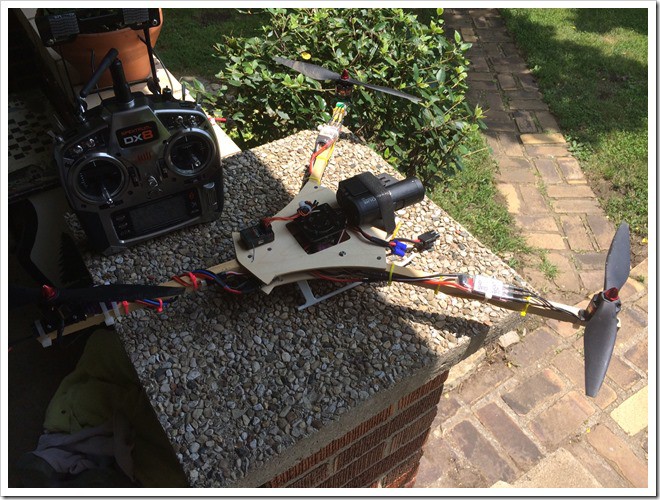 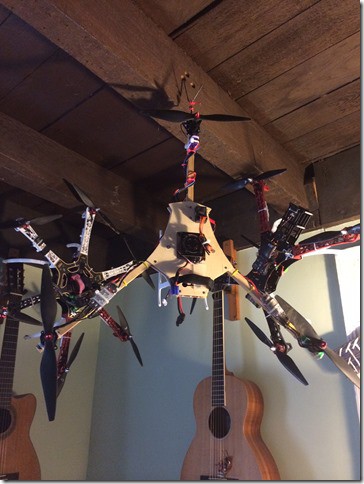 OK, I got some tail swivel parts from my buddy, and got her all back together.

In reality the left arm is still broken, just wedged in the body for this demo proving that she does fly.

This thing is going to be loads of fun once I get the arm fixed and a few things touched up.

Like adding some color to it for orientation and some lights.

Tri-Copter for the Win!

So about a month ago I started putting together my SimpleCopter Tri-Copter.

So in part (1) I had started to migrate the crash parts from my HongKong F330 acro knock off over to it.

The HK330 was a lot of fun, super stable, rock solid actually, provided you didn’t smash it into the ground.   Honestly it crashed pretty well too, but I’d had a few crashes, some hard enough that it pulled the pads off of a couple of the ESC’s.   I’d repaired them but finally one was ruined, so now down to (3) of them I decided to migrate it over to the Tri-Copter.

For what it’s worth…   I’m using DJI 980KV knock off motors, they have keyed prop adapters built in, and I have lots of DJI props so it seemed like a good plan.   My Armattan quad uses 1800kv motors (faster), and the SimpleCopter guy recommends 1400KV motors.   but 1000kv with larger props should accomplish about the same thing but won’t be quite as ‘nimble’.   Less hot rod like.

Why am I telling you this?  Cause sometimes you should just use what the guys recommend.   Had I just ordered up 3 new motors, I could have built this by now.   My motors don’t have mounts, so I needed to order those and I needed to order them 2x because the orders kept getting screwed up.  This literally cost me a month of waiting.

While I really dig the selection and pricing from readytoflyquads.com, the guy is a one man band and while I don’t really have an issue waiting 2-3 weeks for some things, when that order is fulfilled wrong, and things now take 5-6 weeks that starts to irritate me.   To his credit he made things right.

So this is a story where you get what you pay for and sometimes trying to save a buck only costs you more in the long run.

This weekend I finally received my motor mount, which was the missing component to be able to use the fancy tilt block that my buddy 3D Printed. 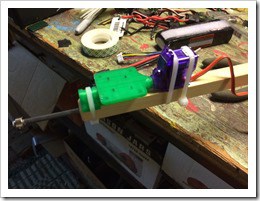 I had what I thought was a really good plan…   Put the ESC’s under the Body and made up some really sweet extension cables from the motors to the ESC’s with bullet connectors.    Got it all together.   Configured the flight controller, calibrated the ESC’s and was just about ready to put the props on and take it for a spin.

I picked it up, and since this thing is kind of big, (and foldable) I folded it.   But the way I had routed the wires, it just pulled the bullet connectors off the ESCs.  Drats.  These were already salvaged ESC’s, meaning I’d broken the connectors off before and soldered them back on, sometimes to the regulator itself.   This was no good and ruined one of the 3 remaining functional ESC’s.   So, I had the motors mounted, but now was short at least one ESC.

I remembered I had ordered 4 ESC’s for another quad I wanted to build so I started to swap them all out. 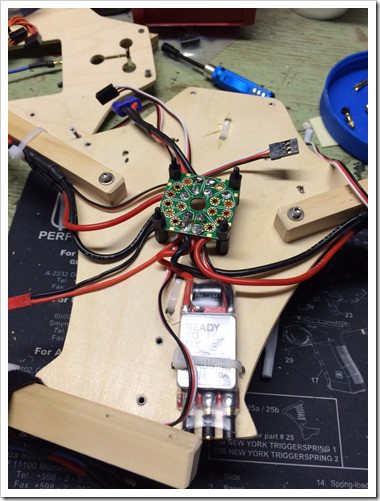 This time putting the front one’s on the arms, and changing the extension cables to the other side of the ESC with pull apart bullet connectors.

As murphy would have it, one of these ESC’s was bad, when I plugged in the battery to configure it,  the magic smoke was let out and it also fried my flight controller

So, using my remaining ESC, and remaining spare Flight Controller I was finally in business ready to fly. 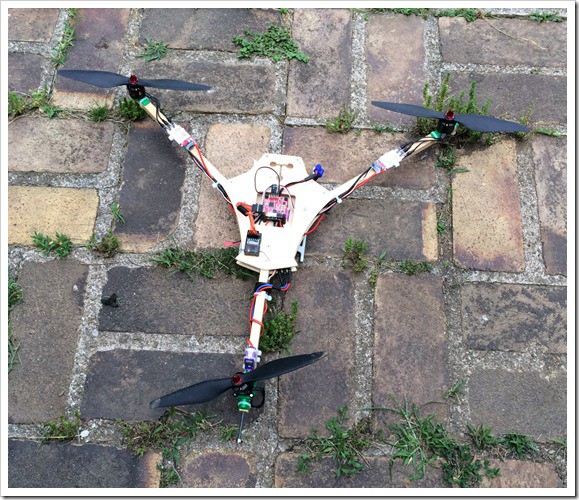 After a couple short test flights I was ready to turn up the gains, tweak the pids and get more aggressive.

I took it out to the field and started to get Jiggy with it.    On my first Flip, something broke, I think it was the 3D printed swivel thing.   It started flat-spinning like a Frisbee, from about 30 meters. 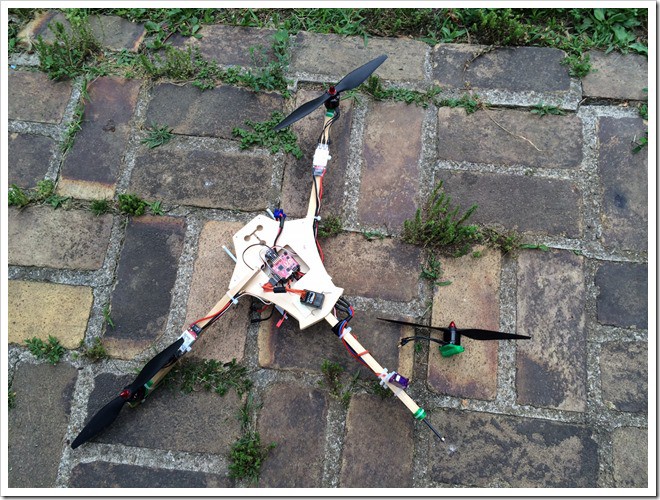 – One tilt swivel
– One Arm, the beauty of which is I can buy 8 feet of this 1/2 x 1/2 inch material from the hardware store for next to nothing.
– And of course, instead of separating at the bullet connector, one of the bullet connectors ripped off the ESC.   But I think I can fix that.

I *think* the flight controller survived, though some pins were bent but we’ll find out soon enough.

With some luck we’ll be flying again after the weekend.