We had some fun tonight catching lightning bugs.   After I convinced him not to ‘squish’ them all he went out hunting on his own.

Matthew and the Lightning Bugs.

In the spirit of good humor, the “Downfall” of Digineer has been recreated in the Hitler Downfall meme. (This is just a screen shot, this video will not play in your browser)

You’ll need to download it by clicking the link below:

At least until we receive a cease and desist order.  Note: my inexpensive web-host is crap, so this might take you a couple tries.

Disclaimer: This is a spoof, it’s meant in good humor.  If you can’t see the humor or don’t appreciate it, you don’t have to watch it, after all, no babies died.  🙂

Back in 2006 when I attended Cisco Affiliate Network.

I purchased a Cisco branded Skagen watch.  The price was right, and I was in a mood for a watch and had been looking at Skagen for a while since they are so light and ‘thin’.

On the way home I noticed it wasn’t keeping time and that bothered me.   It wasn’t until a couple weeks later that I noticed if you bumped it at all, the minute hand would just ‘move’.    It would keep time just fine sitting on the desk, just don’t subject it to any movement.  🙁

I called Cisco Marketing to see if they’d swap me out.   Turns out they were the last batch and since Cisco was in the process of changing logo’s there wouldn’t be anymore.

They suggested I send it to Skagen since it had a limited lifetime warranty.

Well I never did, that was until about a month ago.  I printed out the RMA form, included Credit card info fully expecting to be dinged $30 bucks or so for the repair.

A couple of weeks passed and I noticed that Skagen had only dinged me $8.95 (plus the cost of shipping it to them).  Which appears is the standard fee for warranty repair.   (yes a fee for warranty work, go figure).

I was giddy, looking forward to getting a nice and relatively new watch back.

I tore open the envelope, pulled out the slip and read it.  Work performed Reseal Case & Attached Minute Hand!.

Then I pulled out the box congaing the watch.   I couldn’t believe my eyes.

Where was the minute hand?  Floating around the number 1 and 2 on the dial, completely detached from the movement.   Pfffft. 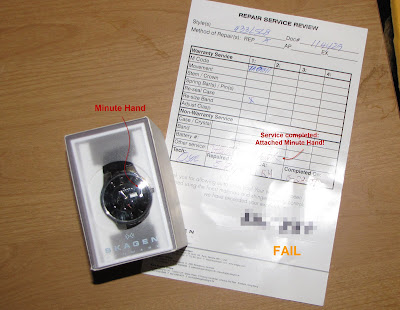 So I turned it over to my wife to handle.  She’s good with stuff like that.  At first they wanted me to ship it to them again (at my cost) and that wasn’t going to fly.

But in the end they are supposed to take care of me.   They are going to build me a watch.  (sans the Cisco Logo) and ship it to me and pick up the bumb fix.

I’ll update if that doesn’t happen.

(Sent to me via a co-worker and worthy of posting)

Suppose that every day, 10 men go out for beer and the bill for all 10 comes to $100.
If they paid their bill the way we pay our taxes, it would go something like this:

So, that’s what they decided to do.

The 10 men drank in the bar every day and seemed quite happy with the arrangement, until one day, the owner threw them a curve.

"Since you are all such good customers," he said, "I’m going to reduce the cost of your daily beer by $20."

The group still wanted to pay their bill the way we pay our taxes, so the first four men were unaffected. They would still drink for free.

But what about the other six men – the paying customers?

How could they divide the $20 windfall so that everyone would get his "fair share?"

But if they subtracted that from everybody’s share, then the fifth man and the sixth man would each end up being paid to drink his beer.

So, the bar owner suggested that it would be fair to reduce each man’s bill by roughly the same proportion, and he proceeded to work out the amounts each should pay.

But once outside the restaurant, the men began to compare their savings.
"I only got a dollar out of the $20," declared the sixth man. He pointed to the tenth man, "but he got $10!"

"That’s true!" shouted the seventh man. "Why should he get $10 back when I got only two? The wealthy get all the breaks!"

"Wait a minute," yelled the first four men in unison. "We didn’t get anything at all. The system exploits the poor!"

The nine men surrounded the tenth and beat him up.

The next night, the tenth man didn’t show up for drinks, so the nine sat down and had beers without him.

When it came time to pay the bill, they discovered something important. They didn’t have enough money between all of them for even half of the bill!

And that, ladies and gentlemen, journalists and college professors, is how our tax system works.

The people who pay the highest taxes get the most benefit from a tax reduction.

Tax them too much, attack them for being wealthy, and they just may not show up anymore.

In fact, they might start drinking overseas where the atmosphere is somewhat friendlier.