In Part 1 I talked about what a big turd this thing is but I failed to mention that anyone selling it as a legit copter should be prosecuted for fraud.   Including one ebay seller who’s in Hawaii, you know who you are.

Turns out the frame is OK, maybe the motors are OK, and the props, well the props are pretty cheap.   But we’re giving it a go at making this as legit as I can.

In Part 1, I cleared out the suboptimal flight controller and ESC’s that come with it.   Cheap, cheap crap.   And installed the 4:1 ESC.   At the time I didn’t have a spare flight controller laying around and was trying to decide what to put on it.

I had ordered a Naze flight controller.  Actually a full Naze32 as well as an afro acro Naze32.   (Which I think is a play on Naza, cause the guy that makes them absolutely loathes DJI, but I’m very curious as to where the afro part comes in).

Basically the difference between the two:

Acro, is just that.  Simple flight stabilization, gyro and accelerometer, but no barometer or magnetometer.

The full Naze has all four components and can handle GPS as well, but no GPS is provided, you have to add your own.  The additional components get you some compass smarts, as well as altitude hold.   Which I have yet to experience with a naze32.  Which reminds me, I need to pop the top and cover the barometer with some closed cell foam. 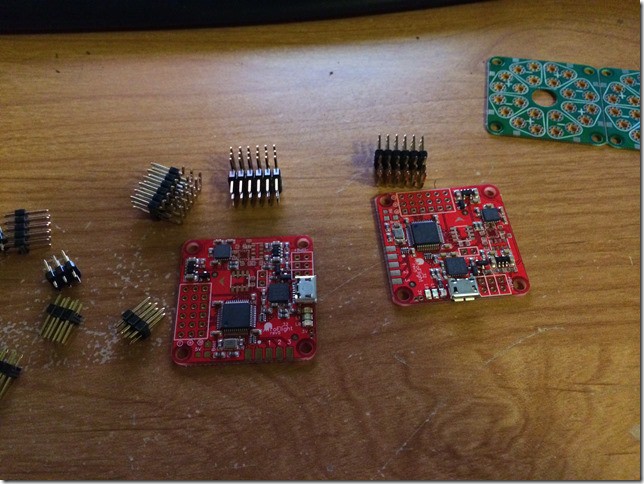 In fact you get to solder your own headers on too.  It’s very DIY, but it’s a slick board.   The same flight controller that powers my Armattan 355.   I ordered them directly from Japan, and delivery was actually pretty good, about a week, maybe 10 days.  There is at least one US Supplier but he was out of stock when I ordered.

The documentation sucks, but there’s some good info on the web, specifically a youtube video going through the options.   It’s a port of the multiWii software I think.  Called Baseflight and you configure it using Baseflight plugin in Google Chrome which works quite well.   Given it’s performance, this is the best bang for the buck out there that I’ve found and I’m cheap so you can take that to the bank.

So after receiving them in the mail even though one was slated to go on a quad build for Matthew that mamma poo-poo’d on, I thought I’d borrow it and install it on the Lotus.   I figure if this things gonna fly, the naze will do well by it.  As good or better than a $200 PixHawk though admittedly without any of the autonomous features.  So here we go.

I soldered the headers, and mounted it on top of the ESC. 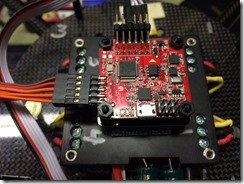 Oh, I’m putting the full naze32 on here.  I want altitude hold on this.

3M Dual Lock is your best friend for stuff like this.  The one with the big hooks.  Great adhesive, sticks to just about anything, and holds really well.  It’s removable and you can easily pop stuff off or reposition it.

I’m also using a $15 Lemon/Spektrum Compatible receiver.  Again because I’m cheap and a real Spectrum AR8000 clocks in at about $129.00   But I do realize you get what you pay for.  Instructions are nil, but the board is well marked.  I originally mounted one to my Armattan, but had an ESC/Motor issue and removed that to make sure it wasn’t this el’Cheapo Rxr.   And it wasn’t so it’s on this now.

After binding my transmitter and setting up the Flight Controller. 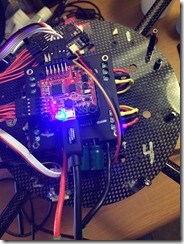 It’s alive.   ESC got sync’d, and it should be ready to fly.  Of course it was 1am when finished so no test flights yet.

Once convinced all motors were good to go, I balanced the props.  I don’t seem to have any of the motor stall/sync issues with this 4:1 ESC, unlike the POS factory one.  At least none on the bench so far.

It fits nicely, though it is big.  And the leads from the motors fight right into the lugs so that was easy which reminds me I need to make sure all of those are tight before flight.

Here she is in all her beauty:

Props freshly balance and it should fly nice.   I expect this to be nice and docile. With the big 14” props.

Here’s a shot with the 355cm Armattan under it for a reference. 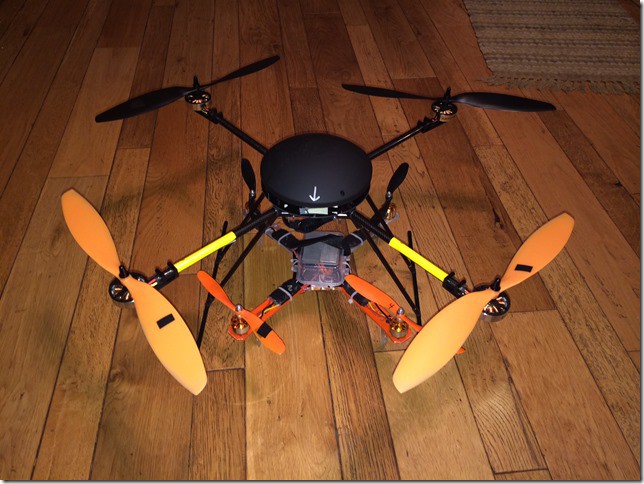 That dome cover on the top is a pain.  A pain to screw on and a bigger pain to line up the screws.   It’s probably not going to last long.   I certainly hope I get more than a few flights out of this.  I have exactly 0 spare props so it’s likely out once it hits the turf for the first time.   Though a motor mount will probably break first and since they seem like really weak points I’m not going to source props for now.

If it flies as well as I think it probably will with new brains and components, I will probably venture into GPS enabling a Naze and see how that goes.   If that works, it will get a PixHawk, but that’s looking forward two whole cycles and if you’re not familiar with this hobby.  Well, that’s highly unlikely.  If it crashes and burns, we’ll chalk all of this up to a learning experience and re-use the Flight Controller/Receiver/ESC’s maybe even the motors on something else.  Maybe a Tarot frame from RCManChild.   Or finally something for Matthew.   Though he’s not getting anything with 14” props.   I’m not completely crazy.

Video will be posted if it works out.

Total build time in this is about 4 hours give or take, including dicking around with the flight controller, ESC and Receiver.