Saturday March 15th was awesome.   The weather was perfect and nobody was home but me.  The perfect opportunity to get outside and do some flying.    A buddy was supposed to come up and partake but he had “issues”, so it was a solo day.

First we spent some quality time with the Armattan, my current sport quad.

After burning up a few batteries with that, I moved on to my newer “Dead Cat” Quad.  Built from a cheap frame upgraded with legit DJI arms, and utilizing PixHawk for the flight controller.

It flies awesome.   It’s not a hot rod by any stretch, but it will flip and roll too.   I had some issues testing the acro mode in Arducopter 3.1.2-r2 so I’m waiting for 3.2 before I try it again.   I don’t have a good camera mount for it yet, no gimbal, nor FPV gear so I ‘temporarily’ attached the ContourHD camera to the front.   All and all for as ghetto as the mount was it did pretty good.

I ran it through a bunch of different flight modes.   Even executed a pretty significant autonomous flight.   Had some fun with guided mode from the tablet too.   Thought I almost lost it too. 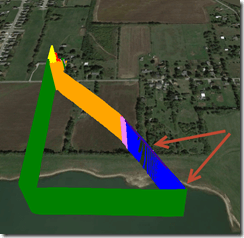 In guided mode I flew it out over the pond at the gravel pit, then over to the east, then asked it to come back, and well, it was trying but while it technically wasn’t beyond visual flight distance, I couldn’t see it from where I was standing.

It was apparently on the fringe of my telemetry radio’s range.  At least that’s my story and I’m sticking to it.   I did eventually flip “Return to Launch” and it came back.  So all is well.

I also got out the Hex, which has the gimbal installed.   I still need to fix the Jell-O-cam issue which seems very EFI’ish to me.  But still, this hex is a stable flier.