But wait, BMWMOA = BMW Motorcycle Owners of America and you don’t have a BMW. Well, I know but I thought I’d ride up there and give a bunch of guys bike envy.

Truth is, my father rides a BMW RT, and his friend Kyle Sr., also has an RT, and his son Kyle Jr., who also gets called Bradley by his father rides a nice RS. So they have a vested interest in going to this show. Last year it was held in Lima Ohio because someone at BMWMOA was getting paid big time by someone in Lima. They had to be, that’s the only reason I could think of having it there so they moved it to Vermont.

We left early Tuesday morning. Our goal was to get to Vermont Wednesday night. It’s about a ~900 mile ride give-or take. But we elected to go all back roads, so it turned out to be almost 960. Kyle Sr. has a broken tail bone so he couldn’t ride the distance and trailered his bike up from Florida.

I met my father at 7:30am Tuesday and we headed on up to Dayton to pickup the Father and Son Kyle’s. We headed out from Dayton 8:30am.

We slabbed it out of Ohio up 675 and across 70 and hopped on back roads across Pennsylvania almost to NY. We punched in the better part of 600 miles that day which wasn’t too shabby given the roads we were on. Keeping in mind we had a Ford F250 chase truck with us. We found a motel around 10pm that nigh and they were kind enough to let us park our bikes on the porch because the possibility or rain was in the forecast. After all they weren’t Harleys ?

The route was pretty much this: 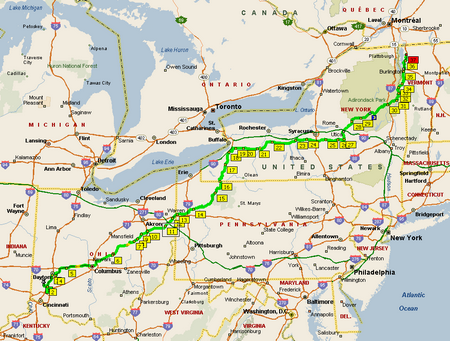 The 06 FJR performed flawlessly on the back roads and the slab. The stock windshield for me is pretty good. I might look at something a little wider, but I don’t want to give up any air flow in the low position. I have a short inseam yet I chose the top seat position for the ride up, (the low position for the ride back). I find myself putting my feed on the passenger pegs a lot. If feel a little cramped at times, or am just not used to the normal pegs yet. I guess transitioning from the ZX-11 will take some time. But I like it.

The buzz is all but gone after the 600 mile service. After about 1200 more miles though the head is a little loose, I’ll need to tighten that up.

The rally was in Essex Junction Vermont, but our hotel was 20 miles north in St. Albans. It was there we got our first taste of Vermont hospitality. Which suffice it to say wasn’t very hospitable. But we ignored it and stayed there anyway. It was already late but we found a nice restaurant in town and had a really nice meal. They were about to close but stayed open for us.

There were 8000 people in attendance; bikes of all kinds, mostly beemers, but you could see just about anything there. The vendor area was a tad disappointing though it was air-conditioned. We attended a tire seminar put on by a tire engineer from Bridgestone. It was hugely informative and it dispelled a lot of the tire myths that are floating around the net.

The beer garden was a hit, and the beers were favorably priced. After the first day we headed back to St. Albans after stopping in a Burlington for dinner. We ate at a little dive bar kinda place but the food was outstanding.

The next day (Friday) it rained a little but we headed out to visit some of my wife’s family. She sent me on a mission while in Vermont to deliver a book while I was up there. The ride took us to White River Junction. Again we took some pretty nice back roads. Until… We hit one road that was unbelievably bad. This road was in poor disrepair. Full of pot holes, frost heaves, and all kinds of crap. I and Kyle Jr. successfully navigated this road. It was either 127 or Blakely Rd. in Chittenden. Both of the RT’s hit pot holes so bad that it ejected mirrors off their bikes and dented their front rims.

In the process of waiting for my dad who vanished from the pack, I turned around on a two lane road, rolled back of the edge and dropped by brand new bike. Grrrrrr!!!!!

Oh, well, the newness rubbed right off right then and there. No major damage, just paint off the left mirror.

We continued our journey into White river Junction, visited with family, then headed to West Lebanon for dinner. We had a pretty good Lobster dinner at the Weathervane restaurant.

We hit a few rain showers that day, but nothing terrible.

Saturday was a different story. It rained all day long. We rode back down to the rally to finish up our shopping and use up our beer tickets.

We chatted in the beer garden and met some pretty nice folks. That’s the thing about these rally’s you get to meet folks from all over. The first night in the hotel parking lot a guy on an older BMW pulls in pulling this ugly home made trailer. Someone asked him where he got that. He said he bought it off a guy in Trenton, OH. I said, I knew it!. There are only 2 people in this world capable of making something like that. “Everett Moore, and Karl Hacker!”. Sure enough he had bought that thing from Karl.

Later on Saturday afternoon I ran in to Karl at the rally and confirmed in fact that he and Everett put that thing together.

We also talked to a guy from Canada that routinely rides his RS’s throughout Central America. Between his 6 different bikes he has a combined 450,000 miles. He was an encyclopedia of information about those bikes.

After all of the drawings had elapsed and we knew that we hadn’t won anything we headed back towards St. Albans. Sunday was going to be a long day, as was Monday.

We ended up eating at the Italian restaurant, thinking we’d get Italian, but again had surf and turf. Hard to beat the lobster when your up in that part of the country.

Sunday’s weather wasn’t looking any better. It was raining when we left but as we headed west after about 2 hours it let up. We got out of rain gear and had a pretty good ride for the rest of the day. We put up for the night in Auburn, NY. Not as far as we had planned but far enough. We stayed in a luxurious Super 8 near the State Prison. Yeah, it was all that.

Monday we made for home, again, all back roads except for the last 155 miles.

It was all good.

More photos, and the high-res versions are in the gallery here.