OK, We just got back from the PSA Shootout and had an absolute blast.

Unlike the local gigs around here where I’m able to shoot both my G19 and G34 in ‘stock auto’, cause, well they are basically stock (except for some trigger work).. In Palmyra I could only shoot one gun in each class.

I elected to shoot the G19 in stock auto, and the (stock) G34 in Open Auto.   At every stage I’d whip that thing out and the RO would say “Hey wait, we have you down for Open Auto”.   And I’d tell them, no, that’s right, but I don’t have an open gun.

Anyway fast forward to the results.   I shot extremely poorly the first day with the G19.   Nothing wrong with the gun, I just laid an egg.   I was nervous, and had some mental break downs as well as fundamental break downs.

Friday I shot the G34 ‘respectable’  Not great but considering the previous days events, oh so much better.   Enough that I would have scored well in stock auto with that gun.   There is mucho room for improvement across the board.   But I can easily see, with some adjustments getting a Glock Race Gun in the top 25 in Open.

I know what you’re thinking, this has been done, you should just go buy an STI or something.

Well I’d love to do that too, but I don’t have the funds.   I think I can build what I want out of parts I already have, with a few additions, and some bartering for under $400.     That’s the goal, heck I can probably do it for less than that even.  So here goes.

I’m starting with my G17, which was a GSSF won handgun so my cost there is literally the $25 FFL fee that I paid to get it to me.

Trigger work has already been done to my satisfaction. It comes in at around 2.8lbs. Let’s call that $40 in parts, plus a lot of polishing. That includes the connector, the trigger stop and some springs, some of which I already had.

I already had a C-More 6MOA red dot that I picked up last year, I just needed a mount.   $40 later via ebay and I have a nice external/frame mount.

This probably won’t be the be-all-end-all.   I think I really want a slide mounted small optic, but that would immediately blow the budget.   But I’m shopping on ebay and have some targets in mind.

With just those items we have a good start: 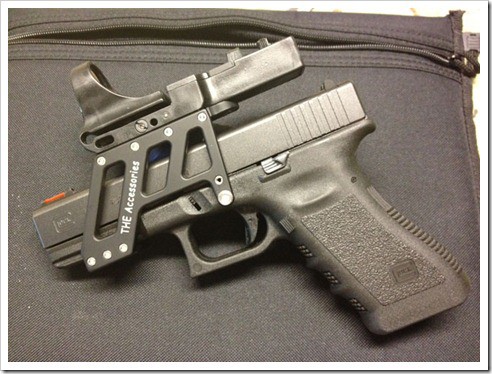 Yeah the mount, I don’t like it, but it’s a start.  I’m going to shoot this a few times and make some decisions.

Next up will be a barrel/comp combination.  Again, ebay and online auctions will be my source if possible.

Then slide lightening/milling.   I’m hopeful that will be low cost through one of my machinist friends.

I already have a plethora of Magazines (haha, thanks Jeff) which helps keep the costs down.   If I picked up another race gun I’d be faced with buying another bunch of mags for that one gun.

I’ll post up more as this develops.  It could be a HUGE mistake, but then even if it is, it won’t cost me much to find that out as I’ll be able to re-use most of the parts.

More as this develops.