Rally the Void for 2011 is in the books.  If you don’t know what a long distance rally is check out my report from the Mason Dixon 2011, or the Void last year for explanations.

This years theme was water towers and spooky stuff, and by spooky stuff the bonus locations focused on Hard Drive Data Doctor and other things that were supposed to be haunted and/or had some bizarre thing happen at that place in the past.

Example from the rally book:

The Void is unique in that it’s run from multiple locations at once with each starting location essentially being it’s own rally (since there is no way to ensure parity).   Our starting location was Clarksville, TN.

The rally was run from 0900 Friday morning to 1400 Saturday.  In order to be in Clarksburg for Friday morning we rode down leisurely Thursday.  Stopping at Makers Mark distillery, and a couple National Parks so dad could get his passport stamped.

OK so normally, or at least in the past you’re given the list of bonus locations ahead of time.   Sometimes as much as a week ahead of time.   This year the schedule indicated that the bonus locations would be available “No Later Than” 8pm Wednesday the 5th.   Which sucked for us, since we knew we’d be leaving early Thursday.  This meant we’d have less time to plan and even less time to second guess ourselves.

I was very happy to find out that the bonus locations were available Tuesday evening.   So basically Tuesday night was wrecked planning routes.

The initial map of bonus locations looked something like this: The colors represent point ranges, the shapes represent availability, the round spots are available 24 hours, the squares are ‘daylight only’, and the triangles have additional restrictions.

(for those doing the math that’s 29 hours total).

Subtract out the mandatory 3 hour rest bonus, that left us with 26 hours to work with.

26 hours at 55MPH average = 1430 miles.   55MPH average is a good average for me, and one that I’m comfortable with.   It’s not but burner gold pace (1500 in 24 hours = 62.5MPH).  But this isn’t that type of ride.  These east coast rallies usually involve lots of two-lane twisty roads, so in all honestly a 50MPH average is probably more realistic, unless you’re just a monster.

The rally also had a 1421 mile cap.  So any miles ridden over that would be penalized at 50 points per mile.

So our target route length was set, at 1400 miles give or take.

For the purposes of planning I disregard any what I call ‘standard’ bonuses.  They are standard in that everyone will likely have them.  They include the donation bonus, the don’t lose your flag bonus, and the rest bonus.

There were really any wild card bonuses in this rally so we didn’t need to consider those either.  We just had to work with what was on paper and I liked that.

The one ‘wild-card’ in this route was that if you stopped by the Rally headquarters on ‘Saturday’ and did an Odometer check route (using up about 35 minutes).  You’d score 1 point for doing so, but any bonuses you collected after that check ride were worth double.

So our initial ride had us killing a bunch of bonuses up to roughly 8pm, sleeping for 3-4 hours, being at the rally HQ at midnight to do the check run.  Departing the rally HQ for leg two and slaying a bunch of high valued bonuses at 2x their normal price.

We had a good route, one I was confident would be a top 3 finish.  It wasn’t overly aggressive, it was just right.   In fact I slept like a BABY on Tuesday after working out our optimal route.

It was noticed that we would hit two ‘high value’ bonuses on Friday that weren’t available until Saturday.   I spent my lunch out re-working things and was once again confident that we would have a good route.

At the end of the day I printed out the rally book and was marking page to make retrieving the information easy.   That’s when I stumbled upon bonus number 109  The group-N combo bonus.   This lovely bonus instructed that if we got 6 of them in a specific order and claimed the combo bonus, that we could score 6666 points.   That was about 1/2 of our 12,000 point route.  WOW, this was a game changer at the 11th hour.

So, of course more time was wasted trying to work that in.   It had lots of pitfalls.   All of the bonuses were only available on Saturday, so it had to be done in 14 hours.  Worse, 4 of them were daylight only bonuses.   Daylight was defined as:  Enough light to get a photo with background items clearly defined or some such nonsense.   That meant with Sunrise being at 0700, it left you with roughly 7 hours to get the remaining four.   While I was sure someone could pull it off, I was sure it was on the edge of our ability and was more likely to cause us to DNF so we wrote that bonus off.

Still we were confident that our route would score well.  Maybe a group-n getter would beat us.   But maybe they’d DNF for trying too.

We left Thursday morning for Clarksville confident we had a good route.   Then we read a question posed to the group.   If you took your rest bonus after the odo-check would that be doubled?  Pfffft I thought.   That doubling nonsense isn’t meant for those types of bonuses, I thought to myself.

Well it wasn’t meant for that but there wasn’t any wording saying it couldn’t so it would be allowed.   The rest bonus was worth 2000 points.  Ugh, making that worth a potential 4000, one that 3/4 the field would go for was a game changer.

We’d have to reassess for the 87th time.

After completing our tour of Makers Mark, and visiting the National parks we landed at our hotel for the start.  Went and got dinner, and re-evaluated the plan.   We still felt that our plan was good, in fact, shifting things around to double our rest bonus would actually score fewer points so we elected to skip that.

At the start we were discussing our plans with John Frick.  We told him what we were going to do.   He said it was a good plan but risky.  We agreed.  Then he mentioned that it was smart that we were starting our rest bonus when we did, and reminded us that we couldn’t start it before 10am.

We got our start receipts, and we were off.

On the way to our first bonus, I looked at our schedule and timeline.   Uh, our rest bonus was supposed to start at 8pm.  For roughly 4 hours.  That meant we wouldn’t have enough rest since it couldn’t be started until 10pm.  How could we have over looked this?   (Knob Creek, that’s how).

I love Knob Creek, but uh maybe it shouldn’t be consumed when planning a rally.

Just before grabbing our first bonus I mentioned to Kyle that we were ‘screwed’, and we were.

At the bonus location we discussed it, and decided we’d just have to adapt and make the best of it.   If we converted our 2000 rest bonus into a 4000 rest bonus by doubling it, we could shift it and pick up some other stuff to make up for it.

It was a good plan, a good adjustment.

We grabbed the first bonus at 10:08am #74 the Factory Water Tower in Franklin TN worth 222 points. 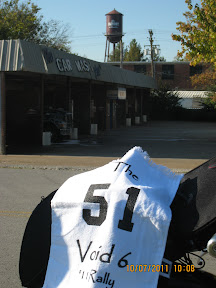 and moved on to the next #73 Billy Hollow Road sign in Pleasant Shade, TN worth 333 points. 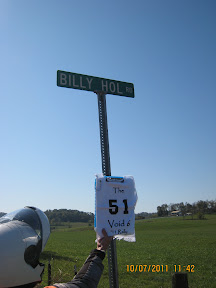 and then #70 the crossville water tower with Budd’s sign in the photo for 111 points. 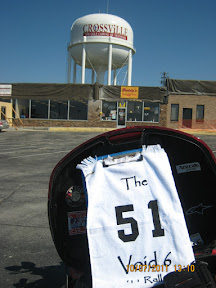 We added Willy G’s grave for 555 points in south Pittsburgh, TN, to help buffer the and make up for dropping stuff later: 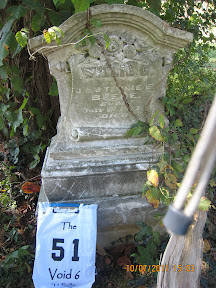 it was quite a bit out of the way.

Then we got crushed by traffic in Chattanooga and Knoxville.  Which cost us almost 3 hours on our way to  Kingsport, TN for 222 points. 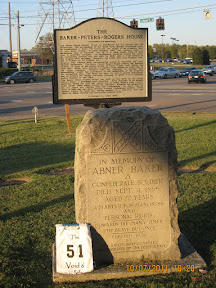 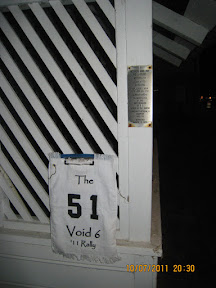 The photo was taken at 8:30, in our schedule we should have been there at 6pm.  The gig was up.  At that point we knew we were way off schedule, and way off our core route.

We headed to the barn for the 12:01 ODO check and 3 hours rest and recalculate.

A word about rest bonuses.

I was sure that we’d be able to get a room at the host hotel.  And since the hotel is (or was) a complete dive, it would have to be cheap right?  Wrong.   They have or are in the process of renovating it and making it nice.   The group rate for the rally was $89 a night.   Honestly I thought that was outrageous and price gouging for that luxury hotel, and by luxury I mean total shit-bag.  But upon returning I was mildly surprised that it was in better shape and was clearly on the path to being a better place.   So I asked the clerk if they had rooms, he said ‘sure’ but he wasn’t able to give us the rally rate and that it would be $125 for a room.

Uh, no.   At that point I wasn’t aware that the rooms were recently remodeled, even so, no, not $125.  Not when I can sleep in your lobby for FREE.  The hotel was kind enough to let people sleep on the floor of the meeting center room.  But honestly the last place I wanted to sleep was on a concrete albeit carpeted concrete floor with 25 other guys snoring like you wouldn’t believe.  So uh, no thanks.

Instead of taking $50 or $75 from me, they let a room go un-sold for the evening.  That’s hotel management 101 failure right there.

So anyway, we decided to see if there was any possibility of resurrecting our botched plan.   I spent about 45 minutes looking at what we could do and we decided to bag it.  But we couldn’t check into our room until 12pm the next day.   We spent our 3 hours in the lobby.  Kyle napped upright on the couch.  I simply can’t sleep like that so I stayed up the whole time talking to Hooch, and Jim Pucket.    When our rest time was over we decided we’d run out and get the low hanging fruit.  After all it would all be doubled.    We identified 3 bonuses that would be an fairly easy 400 mile route and add 1400 points to the bottom line.

We saddled up and rode ~70 or some miles, in the dark, in the cold (we saw 38 degrees in some valleys, and arrived at our destination at 06:15.  I grabbed the rally book to read the description.   But we weren’t at bonus number 98, we were at bonus number 90.    So instead of being worth 444 points it was only worth 12, and best of all it was daylight only so we had to stand around for 45 minutes to get the photo: 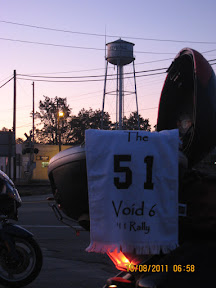 This was the last straw.  We chucked.   It wasn’t mean to be.   A nice family restaurant at this location opened at 0700, so we stopped, sat down and had a nice breakfast.  Western Omelets and Biscuits and gravy.  Yum.

We left there and grabbed two more bonuses, a 111 pointer and 222 pointer (each to be doubled) and headed back to Rally HQ. 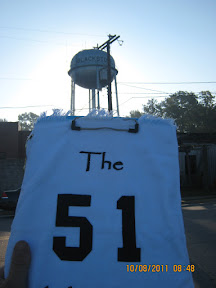 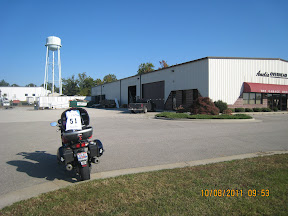 We were back early, like 2 hours early.   But hey we were finishers 🙂 and as it worked out we were right there at the top of the bell curve.

So now we need to buy a shirt 😉

We had a blast, just over 1020 miles or something silly low like that for a rally.   That coupled with mileage to the start and home on Sunday wrapped up a 2000 mile weekend.

We didn’t have nearly the luck or results we wanted but we had fun, and that’s what it’s all about.   Good roads, good friends, good times. Can’t wait until next year.