Truth be told, the factory/stock headlights on the Yamaha FJR1300 are pretty darn good.  I did replace the factory bulbs with some ‘better’ brighter halogen bulbs when it was new.

I also added lower fork mounted lights.  Initially MotoLights[TM], but in 2009 I won a set of Glenda Clearwater lights at the Eastern Owners meet.   These lights (as well as the moto lights), while they do illuminate things up close, and fill in the void near the bike, they really don’t throw any appreciable light down the road.   The are mostly ‘see me’ lights.  Lights there for the benefits of others so they can see me.   The lower mounted lights help break up the ‘single’ light that makes distance harder to judge and make me stand out more.  They help, a lot, but people will still pull out in front of me, even with my high viz jacket.

Anyway, on to today’s project.   While riding rallies that require us to ride 24 hours a day we ride at night a lot.   Often on twisty mountain roads.   It’s often darker than dark.  While the stock headlights are good, it’s still pretty easy to out ride your lights.

With the upcoming Void Rally and others on tap, specifically the 2012 MD2020 which will be almost ALL mountain roads I decided it was time to add some Auxiliary Lighting. 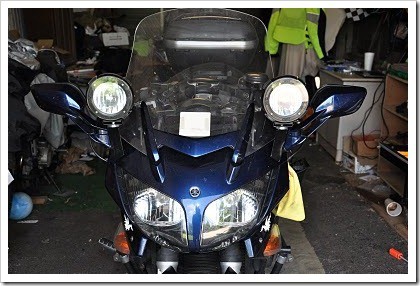 The number 1 self contained HID for this type of application is the Soltek Fuego’s.  While they have gotten cheaper (now $320 each instead of $500 each), a pair is still north of $600 plus hardware.

The next best thing, is the Chinese Knock Off’s.   They can be had via Amazon for $120 each or there about.  Hella also offers these same lights with their name on them.

I lucked into a deal and got a pair used from an FJR forum member.

The next puzzle is where to mount them on the FJR.  The FJR doesn’t really lend itself to lots of mounting spaces, and these lights are LARGE.

The standard approach is using a set of brackets that mount the lights under the mirrors, using the mirror mounts.   That works well for some of the smaller lights but doesn’t work real well for these larger lights or the Solteks.   The other problem with that location is that a simple parking lot tip over (and I’ve had a few in the years that I’ve owned the FJR) will likely break or smash one of your $300+ lights.

I was struggling to find a solution, then ran into Alex’s Brackets.  These brackets were made specifically for these lights or Solteks.  Mounting them above the mirrors instead.  This is good for both tip over protection and getting the lights as high as possible.

I received my brackets, and a spare set of left hand controls off a wreck on ebay for cheap to mount the switch (in case I messed it up), and fabricated a wiring harness.

Since I do have the Twisted Throttle Mirror Extensions, I did have to ‘tweak’ the brackets a bit.   Nothing a little bench grinder can’t take care of.  Repainted them and viola Done. 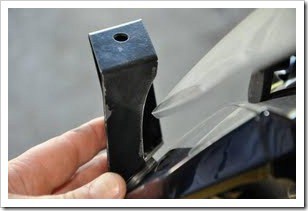 Had to increase the relief for the windshield. 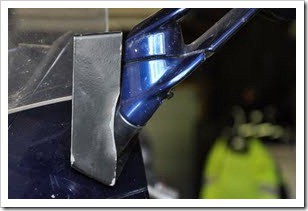 Had to grind a little relief for the mirror extensions. 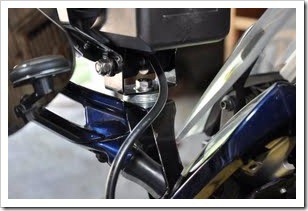 Had to come up with about a 3/8 inch spacer, ended up using 5 fender washers. 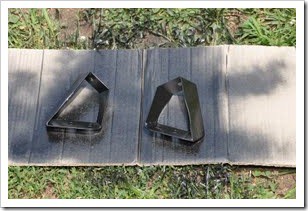 Touch up paint on the brackets and washers once finished. 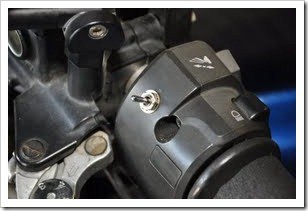 Added this toggle switch to the back of my left hand controls.  This On-Off-On switch, turns the lights (On when the bike has power – Off – On with the High Beams). 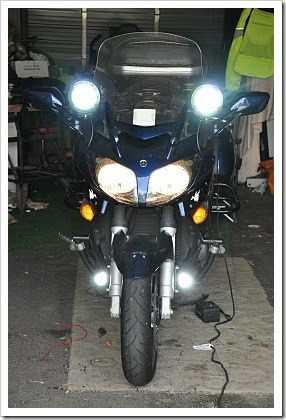 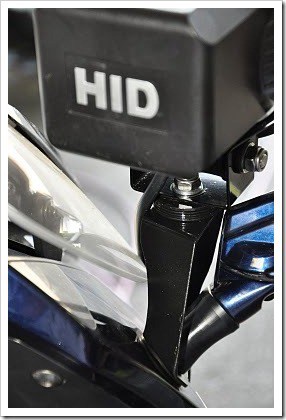 One Reply to “New Eyes for the FJR”