What is a motorcycle rally?

If you already know what a Motorcycle Endurance Rally is.  Maybe because you read my report form last year (2010) or 2009 you can skip this section and go straight to the Ride report.   Otherwise, the basics are explained in the (2010) report.

A Racing theme, no the rally still isn’t a race but the bonus location were race related.  Race tracks, and race teams, race horses, and race things in general.

We were given the bonus locations a week a head of time.  There’s software we use to sort and organize the bonus locations and place them on a map for route figuring.   We color code them based up on value.  This year the values were *special*, in that most were worth less than (1) point.  Like .66 or 1.05 or something silly.  Why is this important?  For one it breaks the excel macro’s for color coding and it just sucks to ride a bunch of miles for like 18 points.

Once the bonuses were fixed and plotted the looked like so: 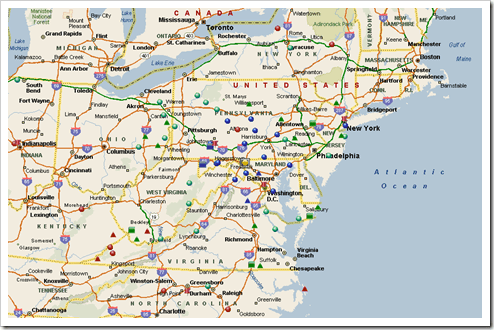 Essentially, to be a finisher you had to score 3 numbered bonus locations plus the mandatory visit to Fort Indiantown Gap cemetery to visit Jim.

As mentioned all the bonus points were sub 5 points, with the exception of 6.

Flight 93, Battery Park (Manhattan, NY) and Arlington Cemetary, DC were worth 11 points each.   There was a bonus of 467 points if you got all 3 (for a total of 500).   So that pretty much made these mandatory.

Then there was Indianapolis for 100 points,  Randleman, NC for 42 points and some crazy location in Wyoming for 751 points.  (The Sucker Bonus). 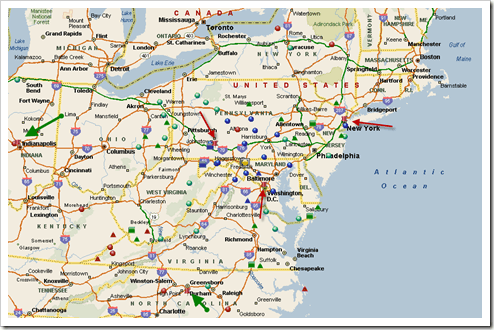 It was clear to score well you’d have to get the big 3.  If you wanted a shot at winning you’d also have to get Indy and possibly Randleman.

To complicate things, NY, DC, and Indy were daylight only bonuses.  You had to get them between 5:30am and 8:30pm.   Pretty crappy, since you only had from 5:30am to 2pm on Sunday.

There was one other wild card, at the rally hotel in Haggerstown, there was a bonus location available from 5pm-8pm Saturday.  Some skill challenges where you could score between –30 and 30 points.  The races/skill test was undefined, and since this is the Mason Dixon rally we had no ideal what type of shenanigans Rick would pull. 30 points would be a LOT in this rally, but with the chance to also lose, we decided we’d pass on those.

I won’t bore you with the 72 iterations that I went through to figure out where we’d go.  If you just got the big 3 you were in a for a nice 800ish mile ride.

But we weren’t in this for a nice ride, we wanted to score well for a change.  It was clear to me we needed Indy.  On Memorial weekend, yeah, race weekend, thanks Rick.

In the end we settled on this route: 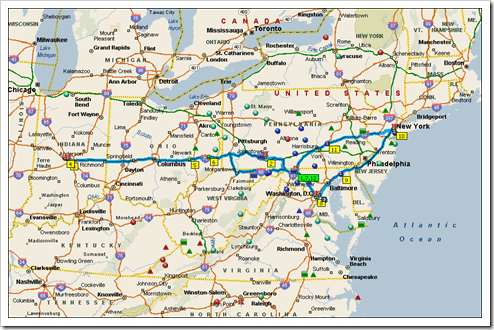 From the barn, straight to flight 93, then beat feet to Indy.  Getting there around 1-2pm.  I did my homework, there was a parade at noon, and generally speaking the area around the bonus would be off-limits.  (Streets closed) but I figured that’d be cleared up by the time we got there.   There was no way I was going to try and go there on Race day, but some folks did at 5:30, about the only time you could *maybe* get it.

From Indy we’d pick up the low hanging fruit along I-70 that was close on our ride back to the hotel for our rest bonus.

We planned to sleep for 4 hours (1 more than the 3 hour minimum rest).  Then get up and run down to Arlington and be there at 5:30am, snap the picture of the memorial and get out of dodge before Rolling Blunder, with special guest Sarah Palin who would be in town (again, thanks Rick)

From Arlington, beat feet to Manhattan, get there around 9:30am, hopefully before to many tourists would hit Ground Zero.

Then to Jim’s grave, again picking up low hanging fruit on the way back to the barn.  That was the plan.  1620 or so miles in total.

And so it began.

With a LeMans start.  Rally riders 50 yards from their bikes with the helmets between us and our bikes.  (nice touch Rick).

And we beat feat to Flight 93 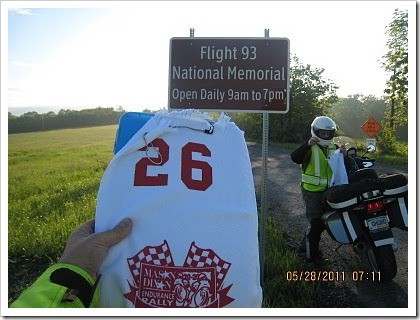 From there it was a long ride to Indy.  We didn’t stop for anything other than fuel.

We made it to Indy, we had budgeted 1.5 hours to get this bonus.   We rolled right in like we owned the place. 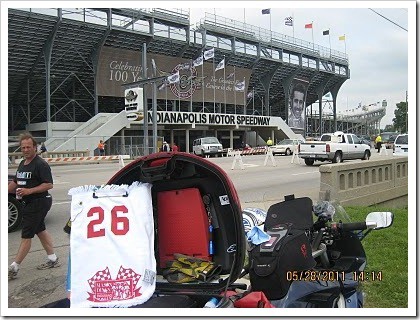 Now technically this is NOT the item we were supposed to take a photo of.  But it met the definition.  “Take a photo of the 100 Year Anniversary Logo on the Museum” or something like that.  Hard to see in the photo but that white sign says “Museum Entrance”.   We were also parked right next to a vendor and bought our ‘wild-card checkered flag bonus’.   3 additional points were available if you crossed the finish line displaying a checkered flag.  At the pre-dinner, desert was cup-cakes that had little checkered flags in them.  I knew we needed that damn flag, but neither Kyle or myself had cupcakes and neither of us grabbed one.

From Indy we actually ran out west of Indy go John Force’s place to take a photo of Eric Medlen’s statue, a driver killed during a test run of one the Force Chassis. 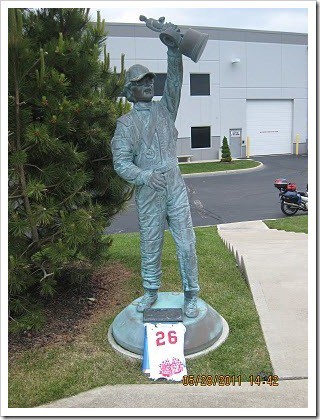 We headed back to Haggerstown.  I –70 would be just as exciting the 2nd time around (not).

On the way back we grabbed the bonus at the John and Annie Glen Historic site: 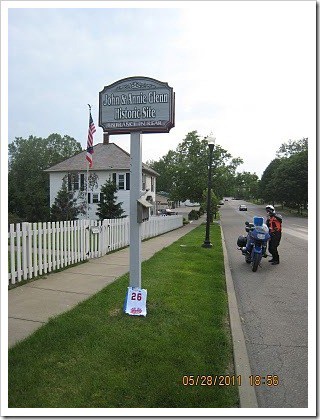 From there some dilapidated old dirt track. 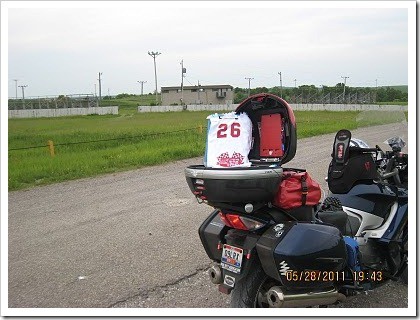 We got Holeshot motorsports in MD 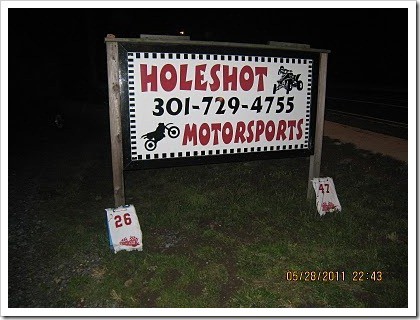 Did I mention yet that riding the slab for 30 hours sucks?  Yeah, all interstate, who’s Idea was this? 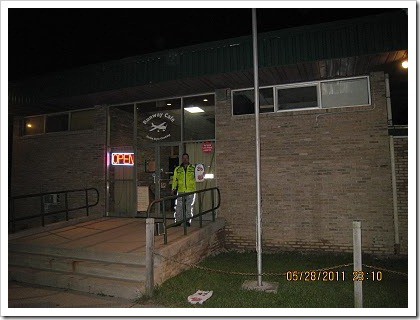 From there it was back to the hotel for the rest bonus.  Which is best documented by using an ATM receipt.  We each got them, then the ATM ate Kyle’s card.  Doh!

The idea given to me by the Void rally master when I had an issue getting a good ending receipt from the hotel last fall.  He said go to an ATM check your balance and use that for the start and ending receipts.  So that was the plan.

We discussed what we’d do to get him a stop receipt.  If you’re staying at the Ironbutt Hotel (sleeping on your bike or on the ground you’ll often just go to a gas station and buy something.   We did this the year prior.  Used a gas receipt, then slept on the ground for 3 hours and bought a cup of coffee from the same joint in the morning.

We decided that I’d just pull two receipts.   What was important was that the receipt came from the same location, same machine, not who’s card was used.  We reasoned that if I had paid for his coffee the year prior, it wouldn’t have mattered, so using my card wouldn’t matter.

We slept for 3.5 glorious hours.

We left a little early to get into DC with the least amount of fuss.

While we had budgeted an hour and a half to get the Indy bonus, it only took us about 20 minutes.  However that extra time we booked vanished over the next few hours.   We were concerned that we wouldn’t close the loop in time.  We had 600 miles to do and figured we’d probable loose ~30 minutes over that time.  Which meant we’d get the big ones and drop all the extras.

We ran to Arlington and go there about 5:15 and had to wait for 5:30 to roll around to take the photo. 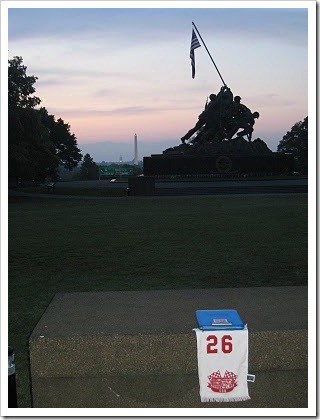 We had to take a photo of the memorial and have the Washington memorial visible in the background.  (note there isn’t a time/datestamp on this photo because I switched to ‘night’ mode to get the monument to show up.

Then we ran straight to NY, dropping two bonuses along the way.

The trip inbound was pretty uneventful for NY.  We rolled up the the target, hopped off our bikes, and snapped the picture.  Kyle got some random tourist to hold his flag.

The target was the globe in the background.   The guys directing the bus traffic weren’t real happy with us but we were in and out in less than a minute.

From NY it was all down hill.   We had one more mandatory stop at Jim’s grave. 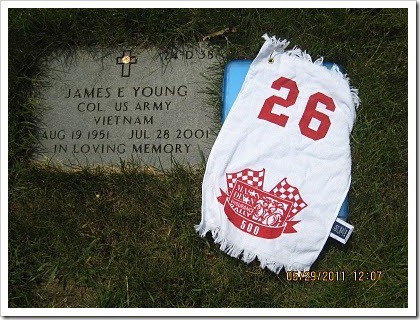 We blew off a couple other bonuses and just headed to the barn.

In the end we clocked in with 1640 miles (or there abouts, I don’t know what the final corrected value was).   783.28 points with all wildcard and check in bonuses.  A good ride.

(IF) we’d a picked up just one or maybe two of the other planned bonuses of which we probably had time to get since we were back 15 minutes before penalty time, we coulda maybe won.  But then again, (IF) my aunt had balls she’d be my Uncle.

Good enough for 4th and 5th. 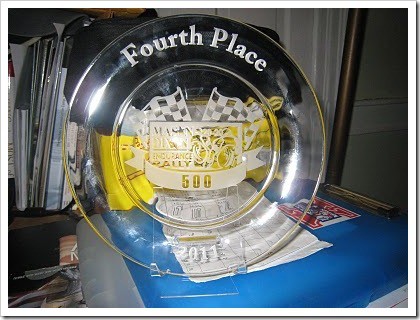 I’m happy with this finish all things considered.  We planned our ride and rode our plan.  We rode safely, and slept well.  Or at least well enough.

But the story doesn’t end there.  After scoring I went out to put the cover on my bike and was greeted with this: 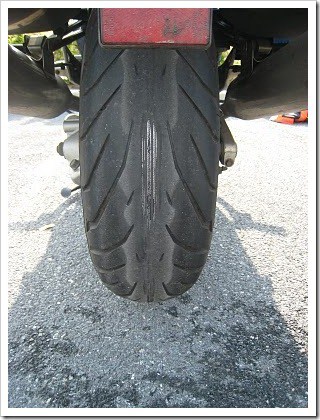 Ouch, with 500 miles to ride to get home, that wasn’t going to work.   At the banquet I asked about tires and tried to find a solution.  Most motorcycle shops aren’t opened on Monday’s let alone memorial day Monday.   It was looking like I’d have to spend an extra night and buy a tire on Tuesday.

Then Ron Moser came to my rescue, he was quite sure he had a ‘take off tire’ that would get me home.  His place was on the way.  150 miles on the way but on the way no-less.  He also had tire changing equipment.   Now I just had to get there.   150 miles was doable with the aid of… wait for it … 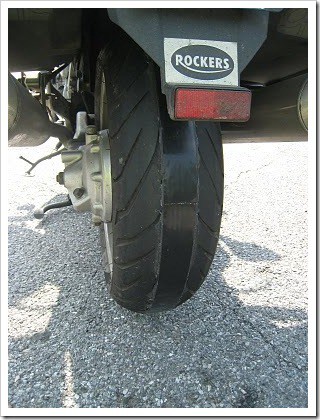 It actually worked out fairly well.  We taped it up, rode 10 miles checked it, it was good.  We stopped about every 20 miles, checked it, re-taped if necessary and eventually got to Ron’s

It works best when you keep the speed down, like under 60, more like 50-55.   Yeah it was hard being passed by trucks, and Harley’s for 150 miles.  But I swallowed my pride in the name of safety and we made it.   150 miles is pretty much the max though.  That tire was way beyond done by the time we got to Ron’s place. 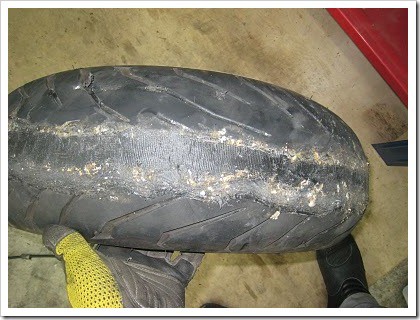 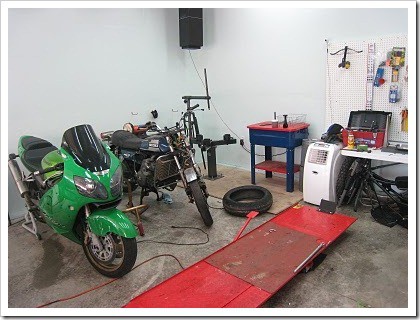 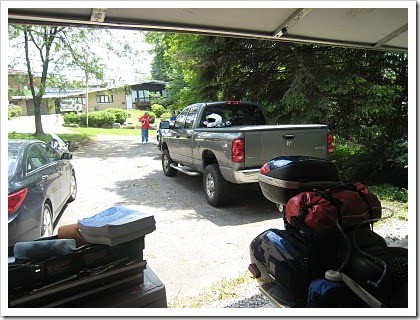 But with my newly mounted new to me Pilot Road, I was good to go.

For what it’s worth, the tire was a Pirelli Angel.  It had 5500 miles on it prior to the rally and looked really goo, good enough for me to take to a rally and expect to be able to put 2500 miles on.  I really though it had another 2500 in it or I would not have ridden the rally with it.   While these tires were ‘good’ they weren’t great, and obviously give up rather quickly toward the end, which isn’t good for me.

At the end of the weekend I piled 2599.2 miles on the FJR, now affectionately named ‘Trigger’.   I need personalized plates. 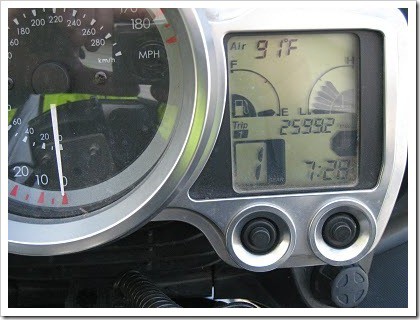