Last year we started a “tradition”.  The “Man Camp Tradition”, which will be an annual motorcycle sabbatical to some place with super roads to ride.   It’s a hand full of guys and the weekend consists of eating like men, drinking like men, and partaking of mostly “Manly” activities like motorcycle riding, whiskey drinkin, card playing, and gun shooting.  (not necessarily in that order).

We’re lucky that one of the participants has access to a Cabin in North Carolina off of route 28, which in itself is a super motorcycle road.

This year was very similar, except I didn’t take nearly as many photos.

We started out Wednesday the 7th of July, with an return date that was flexible based upon weather and activities.   We were fortunate to have Kyle’s dad as a guest this year.  Rounding out the number of men to 6.

Wednesday involved the normal commute to the destination 450 ish miles.   A little longer this year because the Dragon (Route 129) was still closed in Tennessee so we had to divert around the mountain.

That evening we all met up and made our first pilgrimage to the the grocery story for man food and frosty beverages.

Thursday morning was a great day to ride.  Chris had to stay behind and finish up some school work for his Masters.  So 5 of us took off for the good part of the Blue Ridge Parkway and a trip up to the top of Mount Mitchell.

A good day of decent twisties.   It was HOT, but up at altitude along the Blue Ridge it was nice. 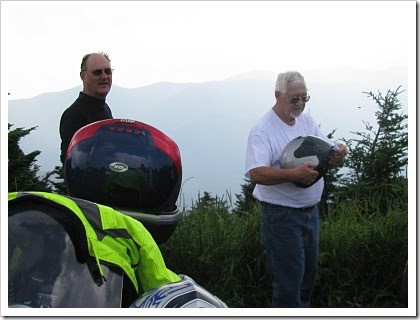 (the older gents at the top of Mount Mitchell)

Friday was more the same with a run across the Cherohala Skyway, and then to the Tail of the Dragon for lunch and a couple runs down the famous Dragon.

It rained while we were at the Tail of the Dragon cafe so we weren’t as aggressive as we (or I) would have liked to be.

We rounded out the Friday ride with a stop at the Fontana damn, then back to the grocery to restock on breakfast food.

Friday night brought with it a 2-Card poker game that Kyle Sr. used to play back in the day.   I’d like to take this opportunity to thank Chris for participating and subsidizing the rest of my fuel expenses.  🙂

Saturday was a ‘chill day’.  Chris and Joe headed for home on Saturday.  Chris had to catch a flight early Monday and Joe was working through some work issues and had to head out.   That left my father and I along with Kyle Jr. and Kyle Sr. hanging out.

We spent most of the day shooting, or accelerating lead towards used beverage cans and just basically chilling.   Both the older gentlemen took the time to watch “The Hangover” on my iPad, which is now a classic.

Evening brought some good barbeque from North Carolina and a shorter ride through some off the path mountain roads.

On Sunday we had made plans to go rafting on the mighty Natnahala river.  (Just a few class 3 rapids, nothing over the top).

We arrived at 10am for our 11am departure.  A 2 hour ride down the river with lots of fun fighting with other rafts in the 51 degree water.   It was cold, the water that is.

At the end of the trip during the largest of the rapids is where we (my father and I) had our out of raft experiences. 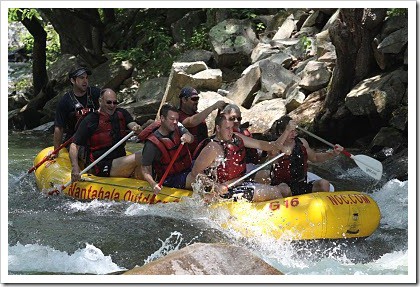 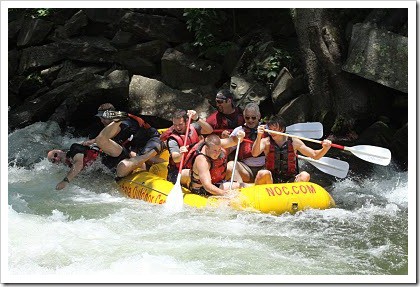 First Dad went, and while I was busy laughing… 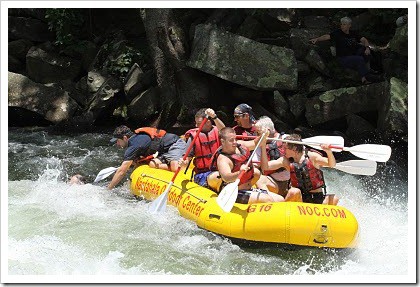 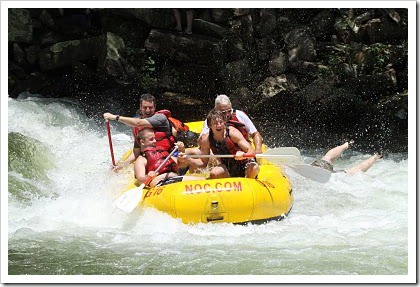 I was swimming, and it was COLD.

I just assumed the rafter/swimmer position and enjoyed the rest of the ride and was picked up by another raft just before the end.

Next year we’re looking at making the rafting a staple of the trip, possibly somewhere a little more exciting like the Upper or Lower Gully in WV.

We left on Monday.  It was raining as we were packing and cleaning the cabin.  We started out in Rain gear for the first 10 miles of our 400 mile journey.  We dropped of the trash from the cabin and loaded up on fuel.  At that point I made the executive decision to get out of the rain gear.  After all if it was only drizzling, I’d rather be a little wet then be hot and stuffy.

Of course as soon as we got into the mountains the sky opened up.   It took us 2 hours to ride 56 miles in rain that was at times “sideways”.  I didn’t get that wet when I went swimming in the river.   It took every bit of the remaining 5 hours to dry out.   In other words it sucked quite a bit.

All in all we had a great time and I can’t wait for next year.