As most of you know, our In-Laws built a house next to us, on part of our property. 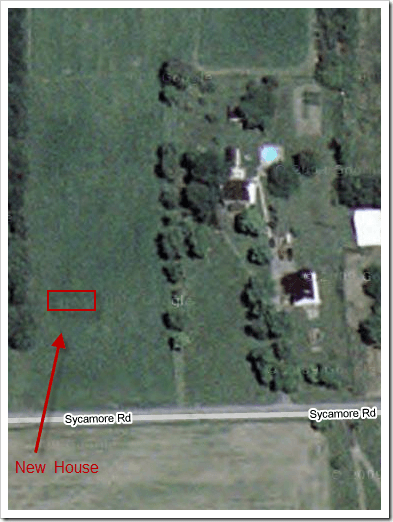 Google hasn’t updated their satellite imagery so you’ll need to bear with me.

The house is done, ready to move into.  The In Laws, hate Time Warner about as much as I hate Cin Bell.  They already have DirecTV but they need internet.  So they ordered up Zoomtown/DSL from Bell.  Easy enough.

The demarcation point for Bell is a phone box in the right hand corner of our yard up by the road, and all of our telecom stuff is buried.

About a month ago they installed a temporary line, which I’ve been mowing around for a few weeks.  Last week they came to burry the cable but they did it wrong. 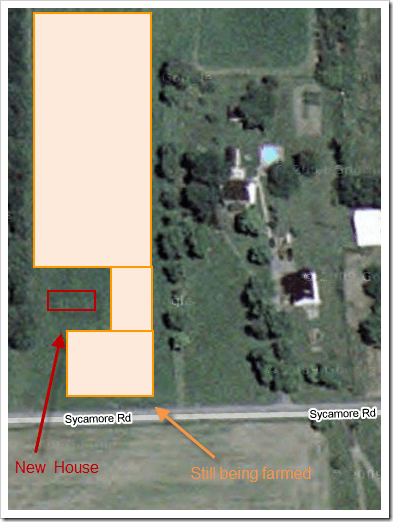 We still farm most of our 13 acres that are not attached to the house.  It’s currently hay, which we use for our horses.  It is due to be replanted or rotated which likely means a year of corn, a year of beans, then back to hay.  We put the house where it is to keep a much contiguous farm land as we could.

Now enter Cincy Bell or ATT depending on who you want to trust as they are each pointing fingers at each other.

Instead of running the phone line along the road (where utilities go), they decided it would be easier to run up our grass driveway to our barn, and across the field to get to the new house.

Which normally would be fine, provided (a) they asked us if they could do that, and (b) we weren’t still planning to farm that area, which we are.

So now we have this: 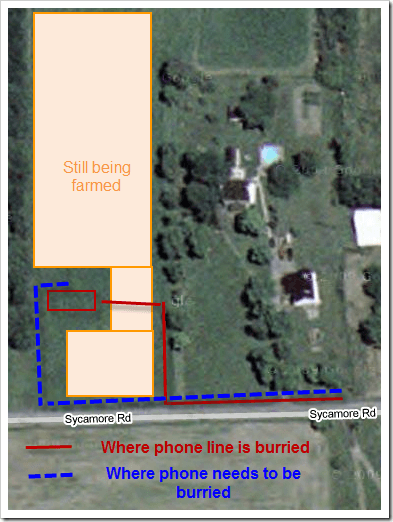 In addition, the line going up the grass driveway is also at risk if we get to the point where we want to put in a real driveway, gravel or not.    Where it crosses what will be farmed.  It will definitely be dug up when the soil is turned.

I’ve now spent about 4 hours trying to get this through to the folks at Cincinnati Bell.

– Well the line works, and since it works we’re not going to come out and fix anything because there’s nothing to fix.
– We can move the line but it will be at your expense.
– ATT: that’s not our line or our responsibility, even though we installed it, we’re not the carrier for this line.
– Bell: ATT installed that and screwed it up, you’re going to have to deal with them.

I have half a mind to ‘fix’ it for them, but don’t want my in laws to be out.  I did finally get a phone call today from a customer service rep from Cincinnati Bell.  He promised to look into it (again).

As of now, they have buried a new cable along the path that it was supposed to be buried.  However, they didn’t take up the initial cable.   So we’ll take care of that for them in the spring and and they’ll be on the hook if the equipment gets damaged.

I will say that Tom at Cincy Bell is persistent.  He called me every day to see if it had been moved.  The last time I looked they had not cut their house over to the new line despite the fact that it was installed.