This weekend I plan to ride my first Official Bun Burner.  I’ve already knocked down a few Saddle Sore’s (1000 miles in 24 hours), but have yet to complete an actual Bun Burner (1500 in 36, or BB Gold which is 1500 in 24).  That later is much less unlikely here in the east.   Not saying it can’t be done, just saying we don’t have highways with higher speed limits like out west.

Knowing that weather may be an issue, I have 4 possible routes to choose from.

The most likely is highlighted in Yellow… 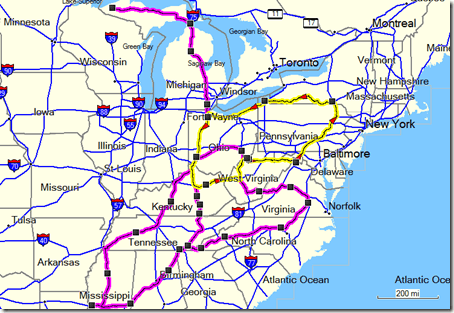 This will allow me to pre-scout the 4 mandatory bonus locations for the MD2020 rally on memorial day weekend.

However, right now as of this post the weather for the entire eastern united states looks pretty crappy this weekend.

My other options are a southern route, and a south eastern route.  Each have their own issues; namely, the Kentucky Derby, and Nascar in Charlotte this weekend.

The northern route is up across the upper peninsula of Michigan.  A much more boring out and back type of ride.

I’ll make the call later tonight which way to go, if I go at all.

I won’t be blogging on this ride, there won’t be time.   But I’ll post about it after the fact if it happens.