A few weeks ago I wrote about a survey that we had done and the encroachments that it turned up.   (read about that here)

Today was ‘D-Day’ for the fence up front.  We tried to be a good neighbor.  We contacted our neighbors, an elderly couple who ‘rents’ the property.

We informed them of the survey, and the results.   Actually the first call was a month ago, and I left a very detailed message asking if they needed or wanted to keep the fence, if so we’d need to get a legal document (at their expense) that acknowledges that they have part of our property fenced in.

That phone call was not returned, so Claudine tried.

Things went from bad to worse.  Both of our neighbors acted like complete a-holes.   We tried to reason with them, and I was very impressed with Claudine and the way she handled them on the phone.

Despite being treated poorly we still took the high road (not my idea mind you).   However, I was no longer in any position to grant them a favor.  No documents, the fence had to be moved or we’d move it.

So we sent them a certified letter indicating that today (the 8th) was the day that if they had not removed the fence that we’d do it and we stuck to our guns.  We ended up giving them more than two weeks.  Plenty of time for them to hire a lawyer to stop us and/or get their own survey.   (Which would have been pointless).

So we started bright an early this morning.   I was somewhat disappointed that the neighbors didn’t even bother to show up and put up a fight.  Especially given the attitude they presented on the phone.  In the back of my mind I was prepared to find one of them chained to the fence in protest.   But that didn’t happen.

With the aid of our Farmers BobCat and Chain we were able to pull all of the trees and fence posts on the fence line that we wanted.

We even managed to get 18 little pine trees planted.

It was still a very long day though and I’m glad it’s over. 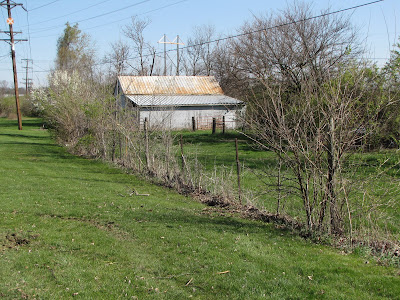 It was a very satisfying day.