This blog does a number of things for me, one of which is my own personal time capsule or library.  When we try to remember when we did something we often turn here.  With that in mind this year we decided to replace our pool deck.

We have our own special FAUX in-ground pool.   It’s an above ground pool built into the side of what was at one point the Summer kitchen for this 1800’s farm house.  From there a deck wraps around it. 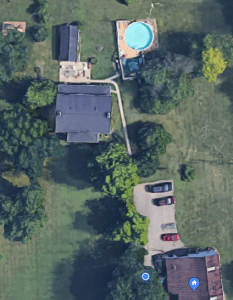 It was here when we moved in, and quite frankly needed replaced about two years after we moved in.  In 2009 we had our pool replaced, you can see how bad the deck was in the photos on that post here.

Part of the problem was that the new pool wasn’t put as close to the deck as the old pool, so we had to build up a little extra trim to get by.

In 2010, instead of tearing up and rebuilding the deck we used “Restore” deck paint, which was awesome and got us to where we are today.  That product worked so well we intend to put it on this deck from the start, or next year.

Over the memorial holiday weekend this year (2018) we gutted the deck, rebuilt a bunch of the foundation, and replaced the surrounding fence too.

The fence still needs painted and will be in the fall.

Lumber and materials were purchased at Menards, though if I had it to do over again I might try Lowes or HomeDepot.  I ordered online, and they delivered it pretty quickly.  However, I didn’t go pick out the wood and there was a lot of low-quality wood in the decking that got delivered.

There comes a time in every boy’s life when it’s time to learn to cut the grass.  Matthew’s training started today.  Fortunately for him it doesn’t involve a push mower.

Unfortunately for me, this means he’s gonna be cutting the field that was the horse pasture for a while until he gets the hang of a 800lb 60 inch zero turn mower. And that’s probably going to be a while.   But for his first time he did great!  I think he only ran into about 3 or four fence posts, even though I cut the first 8-10 feet inside the fence before he got started

The best part is, it’s still going to be fun for him for a while, and doesn’t feel like work.  Maybe I can get him to pay me to let him do it

Claudine was doing some digging (No I don’t know why) and found some good information on our house at the Ohio Historical Society.

It lists the build date as first Quarter of the 18th Century.  We always knew it was old, and knew the very first record of property tax collection was in the 1840’s, but this puts it as being built prior to 1825.

I guess that’s the polite way to say.  Someone screwed up this house along the way, putting siding on it, and taking down walls and sealing up the original fireplaces.”  Yeah, we wish that stuff hadn’t happened too.

Despite the never ending issues that come with having an old home, we do like this place.

But it’s easy to understand why folks don’t tend to invest in restoring them once you do the math.   You’d never recoup the costs involved with doing so.   We’d love to remove the siding, the the cost of doing that, with the expected costs of fixing what we’d find underneath, and coming up with a solution to preserve the old Brick just simply wouldn’t be worth it.  We’d never get our money back.  Ever.  Our house simply sits “On the wrong side of the tracks” in Trenton.

I believe the county/Friends of Chrisholm has spent millions restoring the Historic Farmstead.   Funny thing is, some of those folks are buried in our back yard.   It’s a really cool place though and I encourage you to visit it if you’re into local history.

Here’s a little Quad-copter fly-by of the property, including some of the highlights:

We’ve had a pool since we’ve lived here.  It wasn’t a new pool, though we’d replaced the liner once.

In summer of 2007 it succumbed to moles.  They burrowed under the liner, came up for air, popped a significant hole and likely drowned as a result.  The pool emptied very quickly.

We didn’t replace it until this year, but it’s now done. 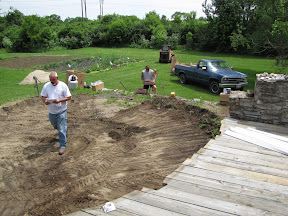 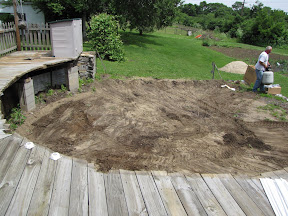 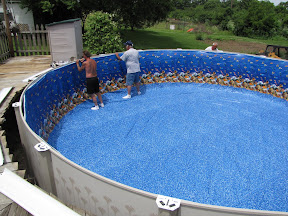 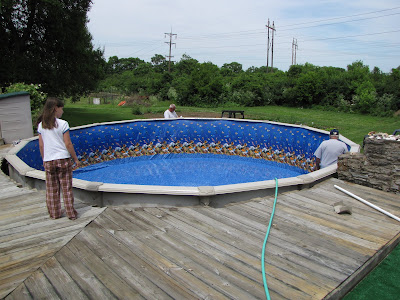 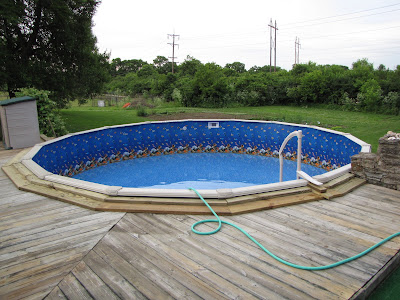 Now for some sunny days to use it. 🙂

We have yet to deal with the encroachment at the rear of the property, but that’s coming.

In the front where we removed the fence, things have gotten a little interesting.

We (well I) really thought the neighbors (actually the property owners, not the actual neighbors) would have shown up on D-Day.  But they didn’t.  In fact it took at least two weeks before they did show up.   Or at least until there was evidence that they had shown up.   I had already mowed the newly reclaimed portion twice before they decided to mow their field.

I figured once that happened and no ill words were exchanged we were past that point.   That was until yesterday.

When I arrived home I noticed stakes with red ribbons in the ground right along side of the trees we had planted.   I found that quite odd, since well, when we planted the trees we made sure we planted them at least a foot inside the line.

I wondered if the neighbor had gotten a survey of their own, but as I walked out to the trees  I could see that wasn’t the case.   Boundary lines don’t typically zig zag like this.   Nope, it appears our neighbor simply decided he’d mark our trees with stakes.  Which was rather irritating since that’s basically what the trees were for.   To add insult to injury, the stakes were driven into the root system of the trees.   For their sake, let’s hope the trees aren’t harmed.

I went and got some string, tied it to the pin that marks where the fence line intersects, dragged it out to the pin in the street, placed a pin near the road and tied off the string.

This line clearly shows that the trees are within our property and not theirs.   I removed the stakes and placed them by their remaining fence.   We’ll leave the string for a while, at least until I need to mow.   Hopefully they’ll see it and get a clue.

Now in all fairness, I did mow around the trees, and with my 61″ mower that meant I cut 48 or so inches of their field for them.  But I guess they don’t want that.

More fun (and photos) to come.