So after the 335i debacle, I still needed to upgrade my ride. The new role at Juniper has me spending way too much time in the car between Cincinnati, Louisville, Lexington, Columbus, Pittsburgh, and Cleveland.  The RX8, as awesome as it is, just isn’t a highway road warrior car.  I need comfort and quiet so that I can continue to live on the phone an in conference calls while I drive around.

During the debacle I got to drive relatively new Honda loaner and I just wasn’t impressed.  I had also test driven a few other cars and just couldn’t shake the feeling I got in the BMW so we started looking around.

As much as I loved the performance associated with the twin-turbo 335i, we decided to take a different approach. We lucked into a pretty good deal on an older and larger 528i. No Turbos, just a regularly aspirated straight 6.  *most* of the bells and whistles.  The bluetooth integration works well. The nav is old and crusty and non-updatable because it’s DVD driven, and  it doesn’t even have heated seats.  Who orders a car without heated seats these days?  It’s had most of the normal BMW leaks fixed recently and the stealership just put brakes all the way around and new shoes too.  So it’s likely I can drive this for 2-3 years and flip it without having to buy brakes and tires.

It’s a quality long distance commute vehicle. I’ll report back on any maintenance that’s required.  We’ll see how much the Bring More Wallet adage is true.  So far it gets a smooth 30MPG on the highway so that’s a significant boost.  I can get from Dayton to Louisville to Columbus on a single tank.   That I like. 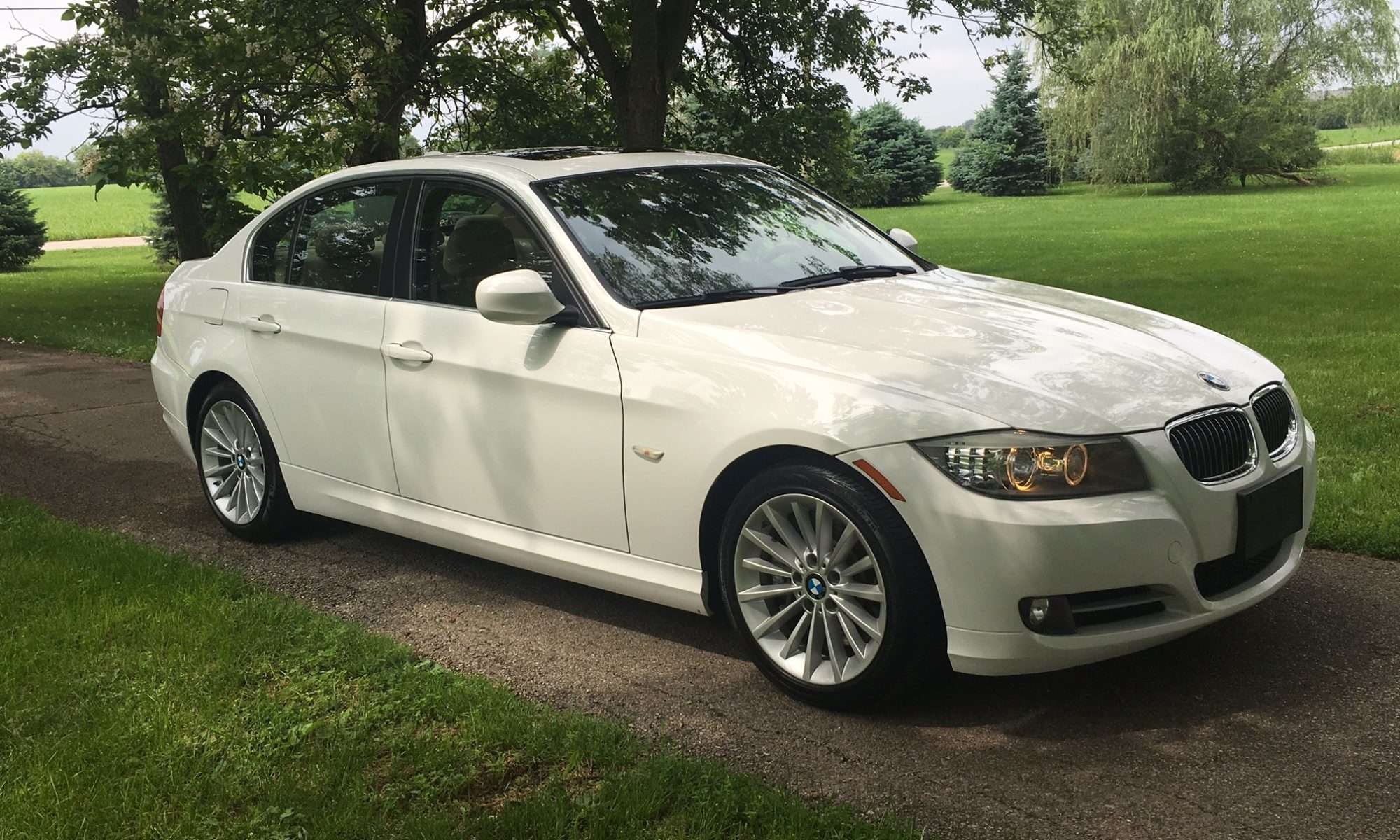 New to me wheels.   I’ve been driving the RX8 for 4 years now and have loved every mile that I’ve put on that car.  But the new job requires me to travel a lot more than I bargained for.  In fact I’m making the rounds between Cincinnati , Pittsburgh, Cleveland, Columbus, Louisville and Lexington regularly so I needed something more comfortable and more suited for highway travel.

I’d been saving my pennies for a while and had been looking at quite a few options. Then this presented itself:

This is the first BMW (Bring More Wallet) I’ve owned.  We’ll see how this goes.

Basically a stock 3 series with Premium package.  Nav / Leather /  Heated Seats /  Premium Sound / Bluetooth (all the iDrive goodness).  It just needs to be driven and I plan to do just that.

So far, the only thing I have changed was updating the Navigation maps to 2017 maps from the 2011 maps it probably came with.  That took about an hour.

I plan to leave it bone stock as I did with the RX8 and simply take care of her with maintenance as required. Exactly 7 days after purchase and 320 miles later, it appears that the twin-power turbo has imploded.  Right now I’m driving a loaner from Joe Morgan Honda where the vehicle was purchased.  They appear to be standing behind it with the 3 month, 3000 mile warranty and have shipped the car to their sister BMW dealer in Dayton.

Update 6/13/2017
The news is back. She needs an entirely new engine. Something about suspected ingested turbo parts. So the options presented to me are as follows:

Option A: Voss BMW (sister dealership) has sourced a 2011 N55 engine with roughly 10k fewer miles.  This engine would come with a 12 month PARTS ONLY warranty (no labor).  I have enquired about them including an extended warranty so that remains to be seen.

Option B: They will ‘un-sell’ me the car.  Refund my money and I walk away.  This obviously seems like the no brainer choice.  Or is it?  If there’s a warranty is that a better deal?

Well, after much consternation and discussion with multiple people who’s opinions I respect, I have ultimately opted for Option B. So…

She saved her money and took advantage of the the 401-Disher Auto matching funds.  Well almost.   We’re in a Co-Ownership position at the moment.

But she now has a car with AC and it’s a convertible, and it’s an automatic since driving a manual really wasn’t going to be part of her long-term auto strategy.   I’m sure she would eventually master it, she’s usually good at just about everything she does.  Except bowling.  I’m afraid, driving a manual might be just like bowling. Just look at that smirk on the test drive.   This was the car. Viola, another one-owner, below blue-book find.  Though not much below, this was a well taken care of car with 87k original miles.

So we’ve been looking for a good used car for Molly for a while, and yes we’re still looking but this popped up yesterday.  Claudine had driven one when were looking for cars for me an liked it.  So we ran to go see it and bought it.

It’s a one owner, 2005 Ford Freestyle, with 71k miles.   Very well taken care of by the original owner and we have every receipt for everything.  Deals like these don’t come along often but they are out there if you look for them. Keeping with the Dave Ramsey, no Debt, pay cash for everything strategy, we used our ‘Car Fund’ and bought this.   Again, a fully loaded vehicle, the only option it’s missing is a DVD player and with iPhones and iPads that’s not a necessity.  In fact nobody really wants to look at a DVD player from 2005 anyway.

So this replaces the 2003 Pontiac Minivan that we bought in 2010.   We actually bought two GM cars that day.  My first and my last.  We still have it, it runs and the AC works.  As soon as we find something for Molly we’ll sell it and likely recoup some of our cash.  It will make a great mini-van, people hauler for someone.

So we’re looking forward to getting a number of good years out of this.  Claudine is so happy to not be driving a minivan, specifically that minivan.  I think she’d be happy in a Honda or Toyota or something not GM.

So we have this Ford, which is actually Volvo drivetrain as I understand it.   It runs great, drives great and so far we’re really happy.

Mid-life crisis? Maybe.   About a week ago we started the quest to replace a car.  We don’t have a single vehicle in our fleet that doesn’t have at least 180k miles on it.  Including our 2000 Ford Excursion, 1999 Chrysler Cirrus, and our 2003 Montana Mini-van.

My first gut reaction was to replace the current mini-van because I hate it.  It’s been the biggest money pit of any of the vehicles we’ve ever owned.  From head gaskets, to broken seats to all kinds of minor electrical glitches.  No more GM products for me, ever.

Since we’ve owned it (and we’ll continue to own it), every time we looked at other vehicles, given current prices of stuff, it just didn’t make sense.   The Excursion just works.  It’s huge, it’s safe, you never have to worry about where you’re going or what you might need to haul.  When looking at vehicles, $10,000 or more, well that buys a lot of fuel.   So we’ve just kept driving it.

Anyway, it was time for a change.   The short list of vehicles included Mazda 6’s, Mazda 3’, Mini-Coopers, Chrysler Crossfires and even Miata’s.    We drove at least one of each.  Well we never really got to drive a Mini but we looked at a couple and called on a bunch.  Cars in our price range ($10k) with under 100k miles were going fast.   We called on one  Mazda 6 less than 15 mins after it was posted on craigslist at 11:30.   Set an appointment to see it at 3pm.  Left the house at 2pm.  Guy called us at 2:10 and said it was SOLD.   Well poop.

We test drove a bunch of trash.  Over priced high mileage cars.   It’s crazy out there.  Everything less than $5k is pretty bad.  Good stuff at $8k-10k goes fast, real fast.

We continued to scour craigslist, dealers and what not and had pretty decided we’d wait for the right Mini or Miata, but we really kinda wanted a back seat.   Then Claudine found our new car.   Truth be told, the guy who listed it didn’t list it right.   RX8’s are listed as RX8 or RX-8.   He listed it as “RX 8”, no mention of Mazda, and so she just stumbed on it and it was still there.   So we took the trip to northern KY to take a look with a Miata in Dry Ridge as back up.

I have always wanted an RX-8.  I love the look, I love the rotary engine.  But one was never in the cards.   They weren’t cheap.  I was shocked when Claudine suggested it.  But it met the criteria.  Small, (reasonable gas mileage), sporty, and has a back seat.  WIN.

Once we saw it and test drove it it was all over. It’s like new inside and out.  2004 Grand Touring 6-speed with 61k miles.   We’re told, it was literally owned by a little old lady who drove it for the first 50k miles.  She got a ‘check engine light’ and parked it.  Scared it had blown up, because these do blow up.   They consume oil by design and people don’t read.  So they drive them, don’t check the oil and well, they are done.   It sat for a year.  When Tim went to see it, it wouldn’t start (dead battery).  So he stole it.   Towed it home, bought an ODB-2 reader.  Put a battery in it, replaced a coil, started it right up, and then drove it for 10k miles.

He replaced the broken sun visors ( a very common issue) and even had a replacement tail light gasket since it was fogging up (also very common).   I don’t think it’s ever been flashed or updated but will check with  Mazda.

So we stole it from him.  He didn’t have a lot of calls, it was advertised wrong.  But we both agreed on a fair price.