Yes, we love our coffee we’ve loved our Krups coffee maker.  Actually we’ve had quite a few of them and I wrote about that here.

Since the last couple of repairs making one good Krups out of two, we’ve been looking for the next replacement.  We located what we wanted and just waited for the right deal.  We got that deal this weekend (Black Friday) on a refurbished unit from Seattle Coffee Gear with a 2 year warranty. 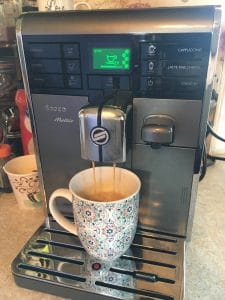 All the things we wished about in the Krups, with a removable, washable brew unit and a few other upgrades.

It’s very early in, we ordered this as a co-Christmas gift.  It arrived today and of course we needed to set it up and make sure it worked.  It does. No point in putting it away until Christmas.