~7 years ago, on another motorcycle trip, Alan (Dad), Kyle and I stopped at Makers Mark for a tour.  We were introduced to the Ambassadors Program, became ambassadors, put our names on a barrel, and followed it from birth to maturation. 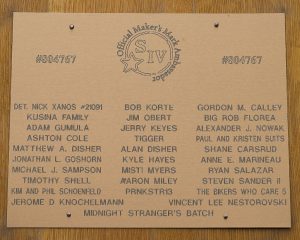 Fast forward to 2018 and our Bourbon was ready to be picked up.  It had probably been almost 4 years since I’d had a motorcycle trip that was more than a simple day ride so I was well overdue.  We put together the group, and added another friend (Carter).

Dad planned the weekend routes starting in Cincinnati, OH down to Lexington, a good ~400 mileish loop for Saturday in KY back to Danville, then Sunday to Makers Mark, then back home.  All via back roads.

Sadly when we departed on Friday the 20th the weather essentially consisted of this: 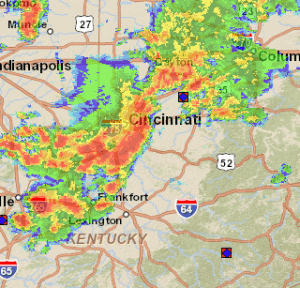 So, while maybe not the smartest thing we’ve ever done, we decided not to wimp out and went anyway.  Pretty much our entire ride from Cincinnati to Lexington on mostly back roads was completely wet.

Now, I know what you’re thinking… “That’s just dumb”, and “That had to suck”, and it was, and mostly did.  However.  Riding in the rain on a motorcycle isn’t nearly as bad as people think provided you can stay dry with good rain gear and have good tires.

We made it to our intended destination only to find that a large majority of the area was without power, including the hotel we we intended to stay. We didn’t check in, headed for dinner hoping that maybe they’d have power in an hour or so.  That turned out to not be the case.  We moved our accommodations to a Marriott on the north side of Lexington.  Everywhere was busy as lots of travelers were seeking alternate accommodations.  Marriott Platinum status won the day, though all-in-all the Marriott folks were more than accommodating for a large number of folks considering they had no internet, an no way to actually confirm reservations or charge credit cards.  As far as I witnessed, no one was turned away.

So Friday evening we spent drying out our gear, drinking bourbon, and catching up.

Saturday morning started our dry with a Ferry ride across the Kentucky River, on 169. Weather for the day was 80 percent chance of rain and it lived up to that expectation. 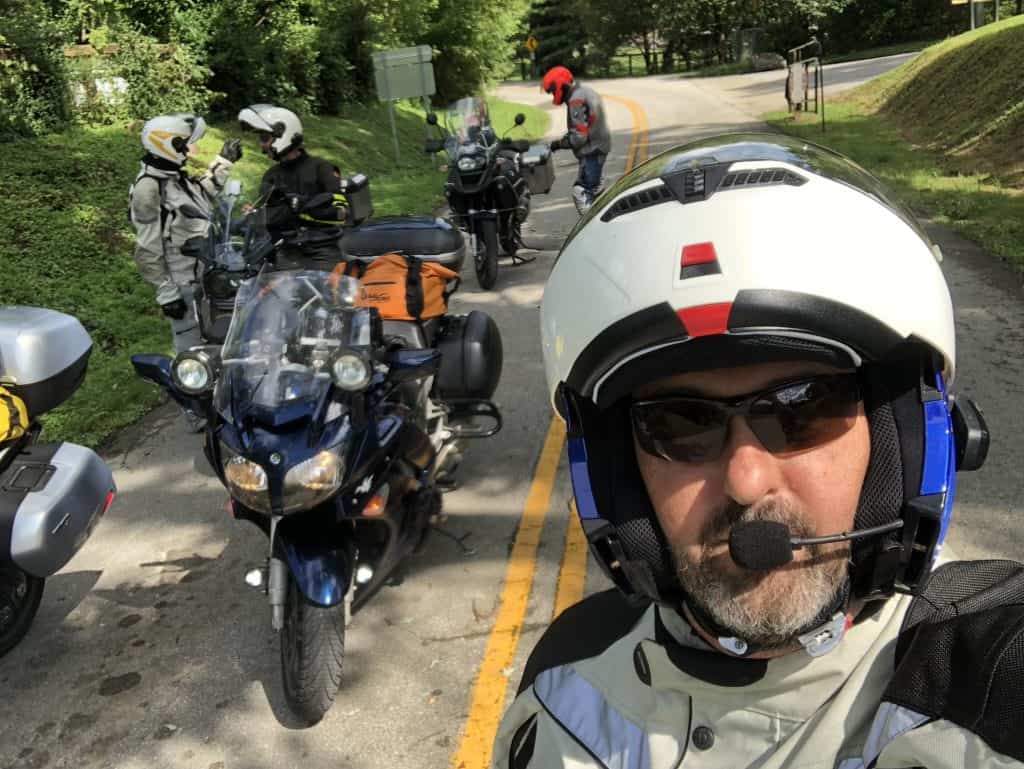 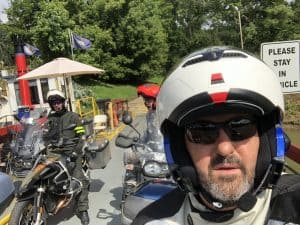 We spent the rest of Saturday around various back roads in KY, all of them great motorcycle roads, and some were even dry.  A Video of some of the excitement is below.

Full disclosure, I only spent about 15 minutes cobbling this together.  The audio sucks and watching people ride in the rain isn’t super exciting.  You’re about to lose 12 minutes of your life you will never get back.

Footage was captured with a GoPro Session and GoPro 4 mounted to my helmet.  This was sort of a test as I purchase these for use while scuba diving in an upcoming Grand Cayman trip.

Did I mention we got rained on? A lot? During one downpour we did embrace our inner Harley rider and hid out for 15-20 minutes. 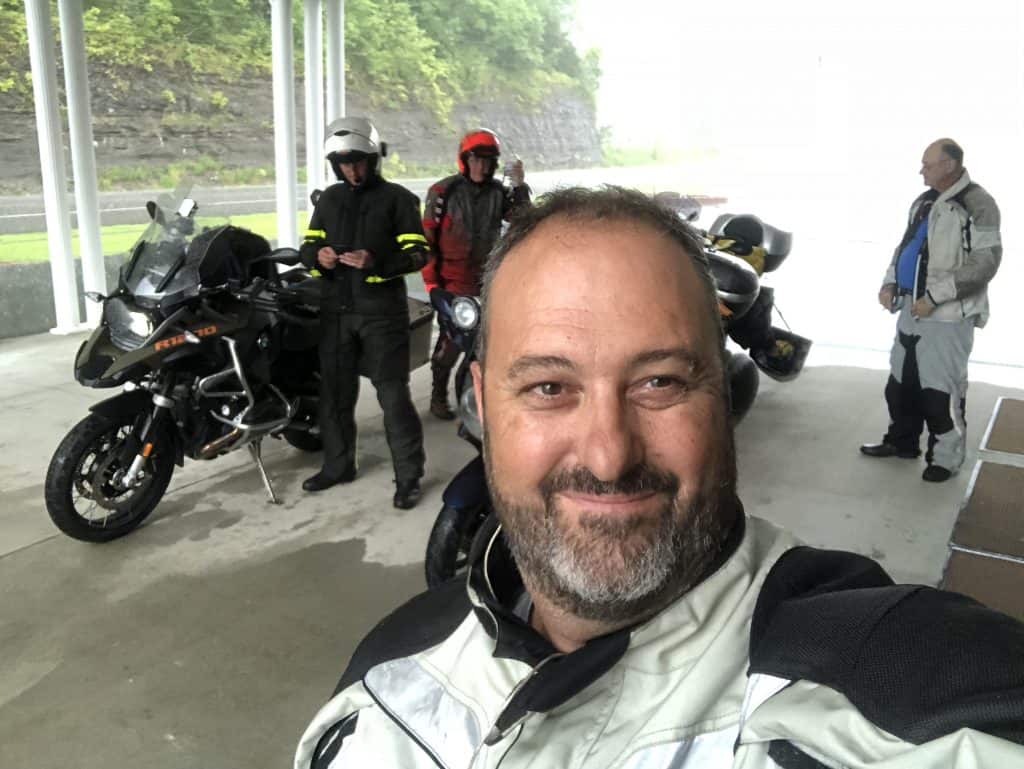 More Video (if you’re willing to lose another 14 minutes of your life) of some of the smaller back roads, and mostly a dry section:

We finished up in Danville, and had a great meal at Guadalupe Mexican restaurant.  Saturday evening was filled with more bourbon drinking and story telling.  We of course evaluated some Jefferson Ocean that was quite good. 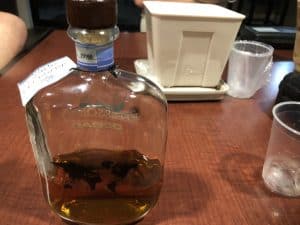 Sunday we slow played it trying to avoid the rain but that didn’t work out either.  Our trip from Danville to Makers, while short was also completely wet.

But we made it, took our tour, collected our bourbon, dipped our bottles and were happy ever after.

The rain stopped about long enough for us to take the tour and walk from building to building. 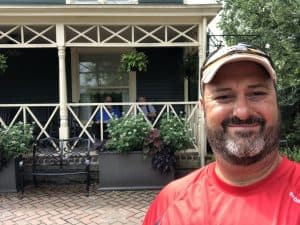 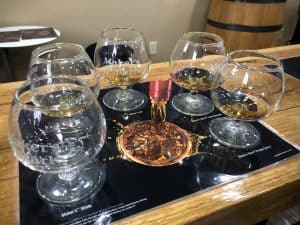 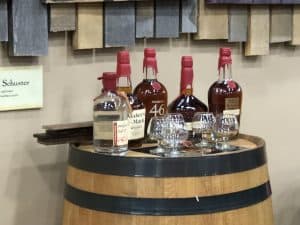 The dipping of the bottles… 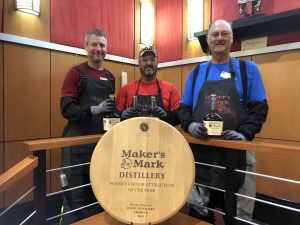 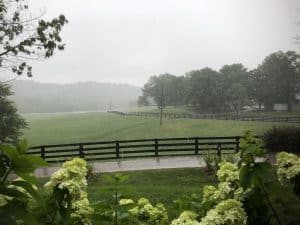 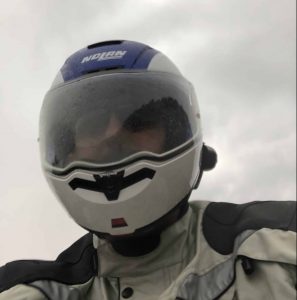 All in all a very successful motorcycle trip and we’re looking to put together another one for the fall.  Hopefully a little drier.