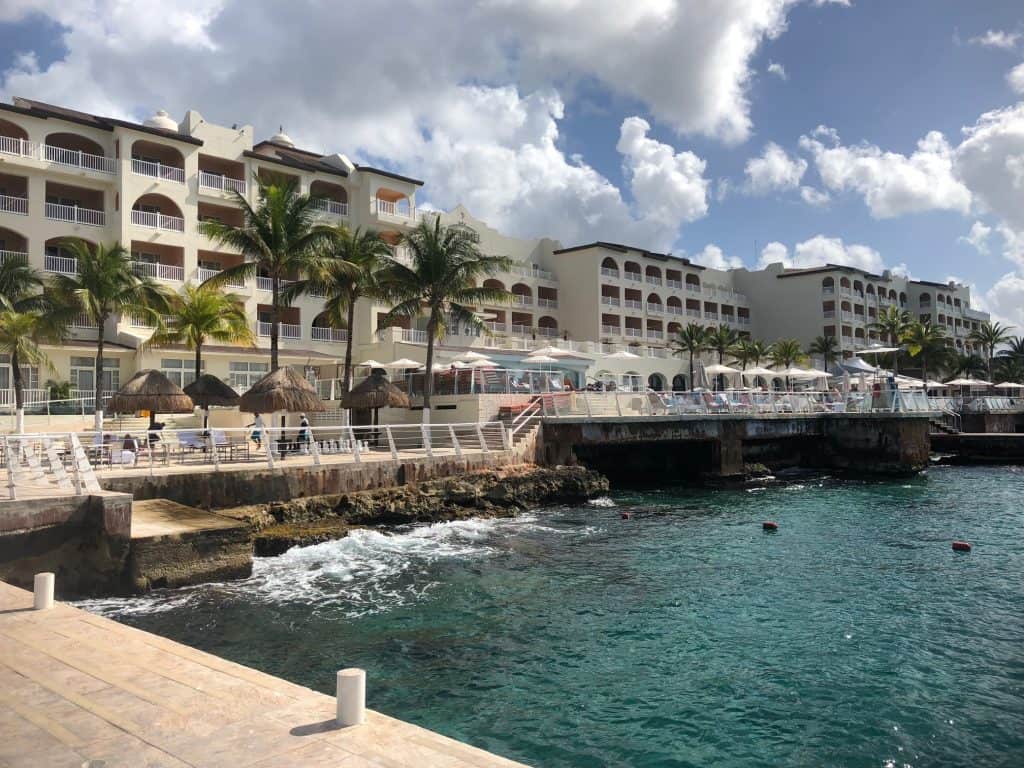 After getting certified in 2017 and doing our first Scuba trip in Grand Cayman we were ready to go again.  We added Nitrox/Enriched Air diver to our certifications last fall and looked forward to going to Cozumel with the couple that we went to Grand Cayman with.

They organized group trip to take advantage of a third room free deal at Cozumel Palace.  So after spreading the cost of the two rooms across 3 couples, our out of pocket was less than $2000.00

That included 7 nights of all inclusive goodness, meals and alcohol.  It also came with $1500 worth of resort credits, which we used primarily for scuba, and a couple’s massage and still left the resort with almost 300 credits for the next visit.

Our other out of pocket expenses were:

Outside of cruise ships we had not previously stayed at an all-inclusive resort. Given the ‘value’ our expectation weren’t very high.

First, the resort is small, some might say ‘intimate’.  I think there are only 169 rooms? There are 3 onsite restaurants, which really means there is only one, but it’s divided up into 3 sections; the fancier higher-end, dress code required Italian restaurant, as well as a Mexican and Oriental themed restaurant.  There is an additional buffet outside, so I guess, technically 4 places to get some food as well as room service 24/7.

Drinks were also included, beer, wine, and mixed drinks.  The  liquor was weaker, so you needed to get two of what ever it is you wanted.  Seems that’s run of the mill for all-inclusives though.

The resort was nice, very clean overall.  The rooms were exactly like what is pictured on the web-site.  We had two double beds, an in-room Jacuzzi tub, nice sitting area, and balcony with hammock. Read that again, two double beds. Had it just been Claudine and I we’d been good.  Claudine drew the short straw and shared a bed with Matthew and didn’t sleep well the entire trip.  The rooms could have easily held two queen beds.  We wanted to get one of the loft rooms with a king and two doubles but they didn’t include those in the buy two get one free special that we were part of.

The outdoor pool area was clean and nice, again exactly as pictured, not a lot of marketing magic going on.

Note: there is no beach, but you are on the ocean.  There’s a great area for swimming and snorkeling and at times there is a life guard on duty.  They have snorkel gear on-site and paddle boards for kids 14 and older.  Matthew and I spent two long afternoons snorkeling.  Lots of good wild life to be seen in their little area.

Food quality: On a scale of 1 to 10, and I’d put Royal Caribbean meals about about an 8/9 on average.  I’d put the Cozumel Palace food in the 5-8 categories. Some stuff was pretty good.  Breakfast, with made to order omelettes was well above average.  Most other meal items were average to above average.  Nothing was really exceptional though.

Service: Service was spotty, when you got service it was good, but there were too many times when we had to go to the bar (while sitting at an outside table) to get a drink or get someone’s attention.  Same with food at the outside bistro.  Once you ordered food it got there fairly quickly, but you had to work to get it sometimes.

One of the couples did the $300 romantic dinner which included Surf/Turf Steak/Lobster which they said was excellent.

At the end of the day the value was still amazing.  Once we back out our scuba costs which we used credits for the bulk of it, it was a great deal and we’d gladly stay there again.  We know how to work the system now. We know when we need to be at dinner to not have to be on a wait list, and how to get someone’s attention.  Every one of the staff that we interacted with was great.  Martha the sitter took good care of Matthew and he eventually knew . just about everyone that worked there.

The Diving:  I would rate the actual dive staff a 10 out of 10.  They really took care of you on the boat.  From helping with your gear to the dive masters being super attentive.  The went out of their way to help Tammy who was 6 weeks from having a knee replaced.  From making her transition to and from the boat as easy as possible to getting her in and out of the boat after dives.

The boat itself was very clean and well maintained.  They provided towels, bottled water, and fruit between dives during the surface interval.

Some of the drift dives were a bit ‘exciting’, like hopping in the fast lane of the freeway with no way to get off.  We’ll eventually get used to it but some of the currents were pretty aggressive for our newbie dive status.

While we will look at other options on the island, we’d would definitely stay at Cozumel Palace again if the right opportunity were to present itself. 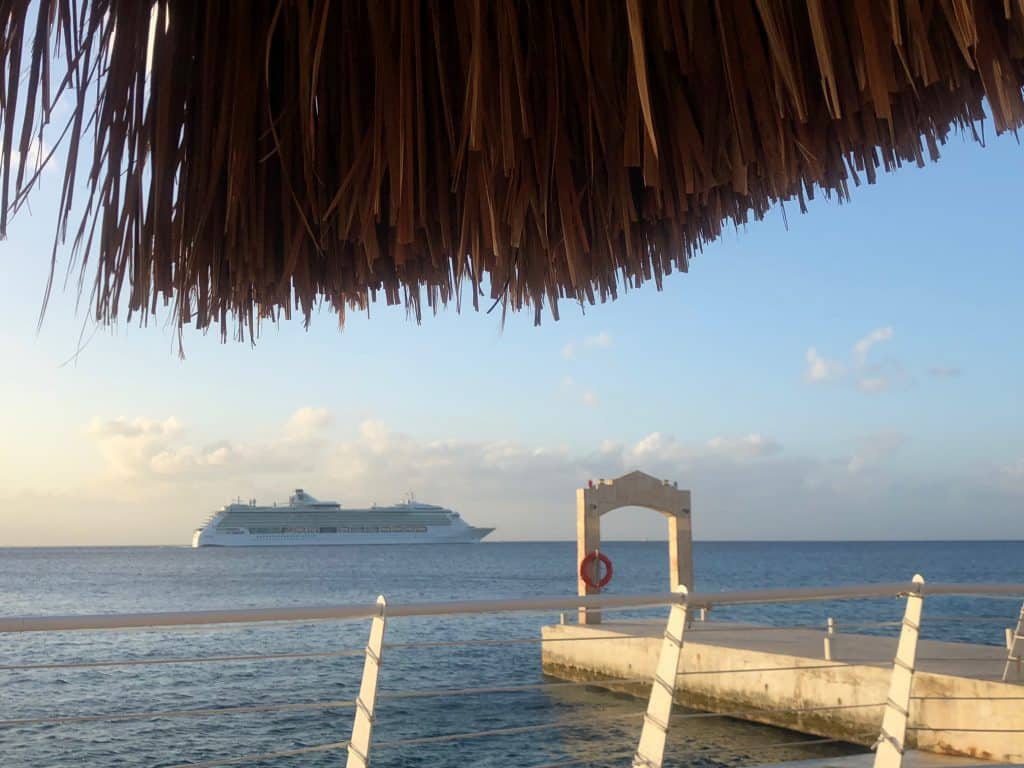 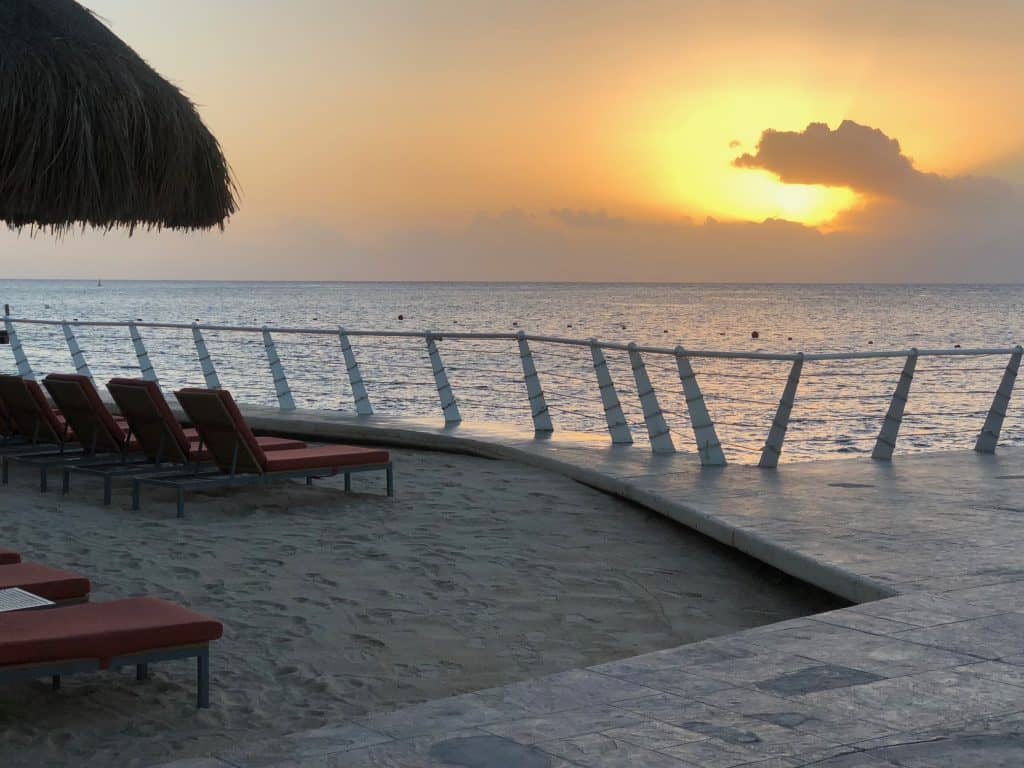