OK, so about a year ago we started shooting, shortly followed by some local competitive shooting.   (www.fridaynightsteel.com) 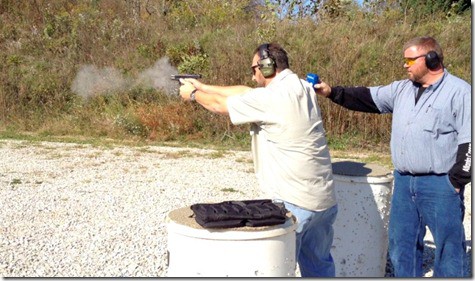 It started out practice and fun and only got more fun.

For now we’re shooing 9mm, because that was the most economical to shoot and the weapons we purchased (and prefer) happen to be in that caliber.

If you go through 100 rounds on a typical night x 2 shooters, that starts adding up rather quickly.   It is amazing at just how fast you can go through 250 rounds in a practice session ($60).

Reloading does a couple of things.   At the base it allows you to assemble ammunition new and sometimes not so new parts . 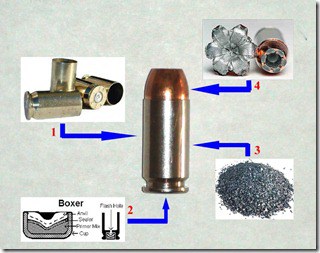 It also allows you to tweak the load and tailor it to your needs or what your gun likes best.

Is it safe?  Absolutely.  Provided you pay attention to what you’re doing.   The two undesirable things that you can do are:

This is a ‘squib’.   Provided you’re paying attention when you’re shooting and catch it the worst thing that can happen is you get a bullet lodged in your barrel.   This in itself isn’t so bad, provided you notice and STOP.  If you attempt to shot another round with a bullet lodged in the barrel. Bad, potentially very bad things will happen.

For What It’s Worth:   I have had 2 squibs from production ammo in our short shooting span, so no, production ammo isn’t immune to this either.  Though neither of those left a bullet lodged in the barrel, they were clearly squibs (more of a pffft, and not a Bang!).

This would be putting two much powder in the round.  It’s certainly possible, but it’s pretty easy to avoid if you watch what you’re doing.  You can add a powder checker to your reloader which will catch grossly over or under charges.

But if you’re careful and watchful, you’ll know where the powder level should be (give or take) when you place the bullet on the case.

The results of an over-charge or double charge can be disastrous as well.   You could blow up your gun in your hand.   So it’s best to avoid this.

Now that that is out of the way.   How much can you save?

First and foremost, save your brass.   I don’t care who you are or what you’re shooting, if you can save your brass do so.   Even if you don’t want to, save it and give it to me.   I started saving brass day one any time I shot at our range or anywhere that I could pick up brass.   That meant I was starting with 5,000 or so rounds of “once fired brass”.

Savings are less significant if you have to buy brass.

Other sources for previously used brass:
(prices accurate at the time of writing)

The latter is not too hateful.    The bottom line though is it helps to save it, pick it up when you can and/or know someone that has more than they will ever shoot and barter or trade with them.

So for the purposes of my calculations, my brass cost is 0¢ but you can add 2-4¢ if you need to buy it.    It’s still worthwhile if you have to buy brass, just not as spectacular.

The three other components you need are:

(Note:  I am not advocating or recommending any of these components. The purpose of this post is about reloading basics, not to debate the merits of each component.  It is not about which primer or powder is best.  I’m just telling you what I am currently using and it is subject to change based upon price/availability/whim.  You don’t have to use/like or agree with my choices.)

Primers and Powders are best sourced locally.  To have them shipped usually involves a Hazmat fee that makes it more expensive.

A Bullet: Outside of the brass, this is the most expensive part.

No one’s ever worn out a barrel shooting lead (so I’ve been told).   It’s cheaper, but not cleaner.   Care must be taken to clean your weapons.  You should be doing this anyway.

Some claim you can’t shoot lead through a Glock stock barrel (or any polygonal barrel for that matter), but I’ve met plenty, and by plenty I mean a lot of people that do on a regular basis without issue.   Granted you MUST clean your barrels, and keep them from fouling that is the key.   If you are lazy or just don’t clean your guns, then don’t shoot lead.

Also don’t breath it or eat it.

These are lead bullets, they are just jacketed in usually copper.   FMJ’s usually have lead exposed at the base, CMJ’s are complete metal jackets.

These are the basics, anything that’s not a pretty typical round nose basic bullet only gets more expensive.   Not saying you don’t want that but for target shooting/plinking/steel shooting, this works fine.

Consider also that you can buy FMJ, Hollow Points or good defensive bullets and make your own exotic loads for less than 25¢ each.   Some of these defensive rounds can cost upwards of $20 for as few as 20 in factory exotic defensive ammo.

These are by no means the only sources but costs are typical.

Bullets are HEAVY to ship so be sure to factor in shipping costs or go with someone who includes it in the price.   USPS “If it fits it ships” must hate these guys.   2000 lead bullets weights in at like 30lbs?

FMJ’s: I’m told but have not ordered any yet is from Montana Gold.

So if you’ve followed along your costs are looking something like:

That’s a less than half or about 1/2 of Wal-Mart pricing which is honestly about the cheapest place to buy factory ammo when in stock.   The savings only get better for other calibers like .380 .40 and .45, etc.

If you reload your own you aren’t subject to their rationing, at least our Wal-mart may or may not let you buy as much as you want depending on what they have in stock.

So what’s it cost to get set up to save this kind of money?

Well the Cadillac for handgun loading is the Dillon Precision 650XL.  with a case feeder.  And all the little extras that you need:

Some of these things are optional but they really make the process much much smoother.

Again, there are other benefits:

– Tailored loads
– Flexibility, I can make what I want when I want provided I keep the parts in stock.
– No more driving around trying to find ammo.
– No more getting told by the Wal-Mart guy (4 box limit today).

Well you have to pull the lever yourself and it takes time.  Once you get rolling you can easily do 800 to 1000 rounds an hour with the 650.   I didn’t believe that at first but it’s true.

Also reloading makes you want to shoot more.  After all it’s costing you less 🙂

It takes space, you need a good amount of work area to do it.   I have a 4×8 workbench that totally consumed with reloading stuff now.

And if for some reason factory ammo gets cheap, you stop reloading and simply start saving brass for when it’s not so cheap.

Other than that it’s really quite simple, economical and fun. 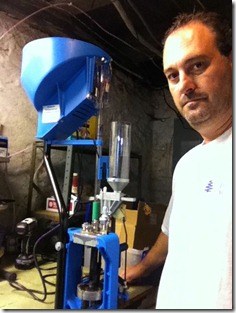