This memorial day weekend Kyle, my dad, and I all rode in the Mason Dixon 20-20 Motorcycle Endurance Rally.   Kyle and I rode in this in 2007 and had a blast.

We got Boondoggled in the rally last time, got led a-stray by Janice, the Garmin Voice.  She took us down what turned out to be a private drive and we got locked in, which totally screwed us in the end.

If you’re not familiar with these types of things.  It’s like a mini cannon ball run, or a big motorcycle scavenger hunt.

We were given the 80 bonus locations and point values about 3 weeks prior.   This year there would be (4) Mandatory locations.  Those locations I hit during my BBG run two weeks ago to scope them out.   But I didn’t really know what I was looking for. The rules this year were pretty simple.

After much planning the route Kyle and I and dad chose was basically this: It wasn’t a winning route but if ridden properly would have scored almost 3000 points.

Now having recently visited these four mandatory cities, and ridden around them, the biggest thing to influence my route was that Route 50 through West Virginia at night in the rain was not any fun.  In a rally you need to make time, that means riding the speed limit regardless of conditions.  You cannot ride route 50 in the dark, in the rain at the speed limit,  not easily and especially not if you’re fatigued.

So that being the case, we wanted to hit that stretch early if it wasn’t raining and in daylight.   We were off shortly after the start.   Kyle and I rode together.  Dad rode alone.   Two riders slows you down some, three riding together only compounds the things that slow you down.  Dad was running the same basic route.  We rolled out of the parking lot what we thought was probably a good 10-15 minutes before dad would leave.

We hit our first mandatory at Winchester at 6:12 am.    This meant we had 24 hours to get back here after visiting the other 3.   It also meant that if we were to spend our rest bonus in Winchester, we just shorted our 24 hour time period by 12 minutes because the rest bonus had to be started by 6am.  So we had to be back there by 6am.    (Of course we could have rested in side the 24 hours if we felt we could make that).

Off to our first bonus location on Route 50, a historic marker: 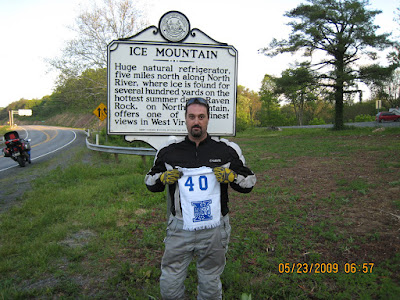 As we pulled up to this location.  Dad was already there.  We were somewhat shocked.   But it was ‘game-on’…

We were riding behind a couple from Canada, prepping for the big Iron Butt rally and figured if we can hang with them we might learn something.

We snapped our photo and took off.  We caught up to the Canadians and followed them at warp speed across Route 50 and the mountain(s). Great riding.  Dad was with us/behind us and I wondered how long that would last.

There was a 20 point bonus on route 50 that we dropped from our route because it was 10 miles off of Route 50 on a goat trail of a road.  That’s at least a 25 minute delay to go get that.   What we didn’t know at the time was that dad’s GPS had rebooted and he had lost a bunch of the bonus locations.  He knew where that one was and peeled off to go get it.  When Kyle and I stopped at the next location we discussed the fact that he went and got an ‘extra’.  Which meant, he would either (a) blow the 24 hour bonus, or (b) beat us…

The next stop was a marker that marked the highest point on the Maryland road system: 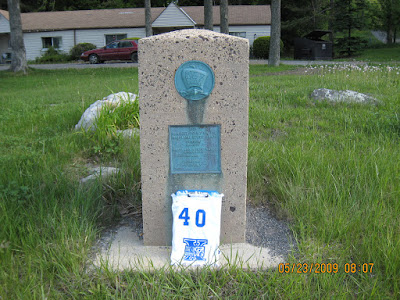 We pushed on across RT 50 to the Taylor county War memorial: 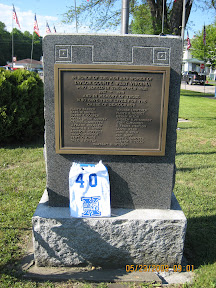 Then to a couple question/answer bonus locations, and finally into Saint Mary’s WV to get our fuel receipt.

Things were clicking right along.  We were spot on our times for each location.

We continued on up through PA on our way to Erie.  Along the way we stopped at the National Cemetery of the Alleghenies. (Most of the boni were war memorial related, this being on Memorial day weekend and all… 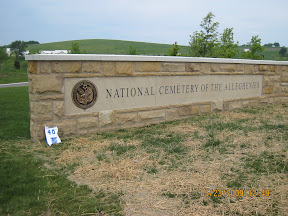 We also hit this historic marker, marking the birthplace of the ‘Jeep’ 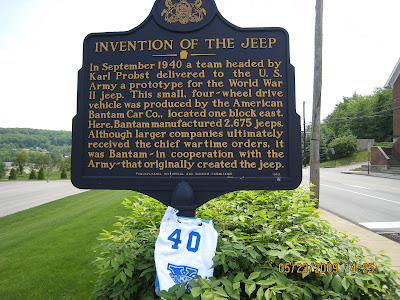 Just prior to getting the Erie bonus we hit up the bonus at the Erie international airport.  This flying Walleye. 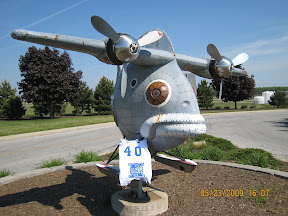 We were still on time.  One of the wild card bonuses was a receipt for a ‘Tasty Burrito’.   Chipotle came to mind but we didn’t have time to fine one much less eat one.   The caveat was a receipt that said ‘burrito’.  Our first attempt was at a gas station, one of those frozen heat and eat burrito, but the receipt didn’t say ‘burrito’ it said something like ‘food-item’.  We kept the wrapper and would plead our case at scoring if we didn’t find a better receipt.

In Erie we ran into a Taco Bell, and asked for one Bean Burrito.  I thought they were $.69, but no more.  That receipt also didn’t say Burrito, it said ‘B-Bean’.  We had the teller write burrito on the receipt, sign it, and put a phone number for verification.

We then hit the gas pump and headed north to NY, and one bonus stop off of I-90, this light house: 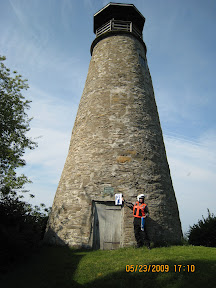 Back on the turnpike and making good time.  At this stage we’re cutting it a little closer but still  had a 2 hour buffer.

As I’m changing lanes I cross over a rather large tar snake and my bike now feels funny.   Kyle rolled up to me and pointed to the side of the road.  My rear tire was going flat and fast.

No worries, we plugged it and were back on the road in about 10 minutes.  It felt like a hour.  I was now worried.  Would the plug hold?  How much time did we burn?  How much energy and mental capacity did we just waste?

On to a big bonus 220 points, the original Jello factory and museum.

This was a typical Rally bastard bonus.  The location took you to the front of a building with the description ‘Take a photo of the truck shaped sigh on the front of the Jello factory museum’.   The problem was the sign wasn’t on the front of the building we were parked in front of.   It was on another building in the back.  We found it, got the photo and took off.    It was clear to us that other riders had already been there.  The rock on the railing to hold the flag was kindly left there for us 🙂 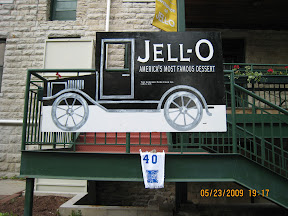 The next stop would be to count how many Cabooses made up the Caboose Hotel.  The answer is 5.   This is also where it went from being light out to dark out.  Meaning this is where I would have to change from wearing Sunglasses to the ‘clear’ safety glasses.  (With my windshield up, I often ride with my visor up, it’s quieter and cooler, but I still need eye protection).  This is where I learned two things.

a) $5.00 cheapo clear glasses will simply get all scratched up if you just let them flop around in your top case.  So much so that they become unusable.

b) When you’re tired, you really need to check everything twice.  This is where I *lost* my $100 Oakley sunglasses.  At least I suspect it’s where I probably set them on the back of the bike but didn’t put them away.  Grrrrrr….   When we stopped at the next stop, I wanted to put them in a special place, realizing that having them flop around in my top case was likely to scratch them up like the clear glasses.   This is when I realized they were gone.

The next stop was Horsehead, to get a  photo of the Horsehead rock.   Kyle was worried, even though the sign said Horsehead rock, it wasn’t horse shaped. 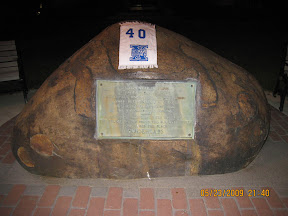 We flew to Binghamton, got our gas required gas receipt.   We were still on time, with a 1 and half hour cushion.  I had already mentally written of a bonus on I-81 that was 20 miles off the beaten path.

We went to Sweetwater to get a photo of a war memorial but the coordinates put us in someone’s back yard.  No memorial to be found.  We did find this about a block away and took the photo just in case. 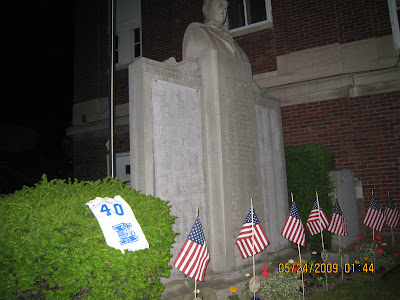 We were currently being surrounded by thunderstorms and worried we’d have to ride the next 4 or so hours in the rain. And we did for a good portion. By now it was 2am, we’d been on our bikes since 5:40am the previous morning. Fatigue was really setting in. We decided to blow of the 2 bonuses and head straight for Winchester. We had to get there by 6am. It was dark and raining pretty hard at times. But the fatigue was killing us. We had to stop, and stop often. But we manned up and made it with a little time to spare. We punched our Winchester receipt at 5:25am which also served to start our rest bonus. Our original plan had us back at Winchester by 5am giving us time to get back to the Rally Hotel to sleep for a couple hours, but that didn’t work out. Instead it would be a few hours at the Iron Butt motel. This meant my therma-rest on a patch of grass behind the gas station. It was about an hour and a half of blissful rest. At 8:30am we rolled out of Winchester with the thought of getting the big 387 point bonus which is in the rally every year at Jim Young’s grave. About a 100 miles north of Winchester. 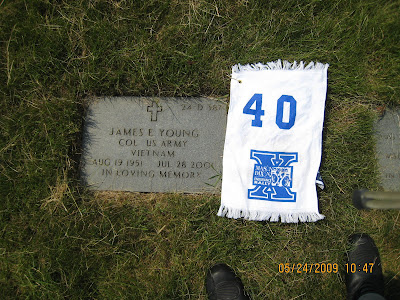 There were other bonuses to get but Kyle and I were beat and headed back to Rally HQ.   We didn’t want to be late.  Every minute past 2pm cost you 20 points.

We felt good about what we had accomplished.  Now going on 2 hours sleep in the past 36 hours we were worn out and still had to complete all of our paperwork for scoring.

My rally tip:  Write everything in the Rally book as you get it, not on a sheet like I did.  In copying everything over to the rally book I left off the Jim Young bonus.  So even though I had the photo, without claiming it in the rally book I got a big fat ‘0’ for this bonus.  That cost me almost 15 positions in the final tally.   Lesson learned the hard way.  This is my 3rd rally, and I’ve yet to not screw it up somehow.   Maybe next time.

Kyle missed one of the question bonuses, and for some reason they didn’t give him credit for that war memorial that they gave me credit for.

Dad, well he did well.  He didn’t DNF.  He didn’t close the loop in time.  He thought he wouldn’t make it so he went to the  hotel for the rest bonus instead.  He also screwed up some photo bonuses.  He didn’t check his camera settings and recorded them as movies.  But in the end he did well.  Had he closed the loop, he may have beaten me.