Molly started the season in Level 5 again, but then after 2 meets we (and her) decided it wasn’t working. It was a tad too stressful for her. 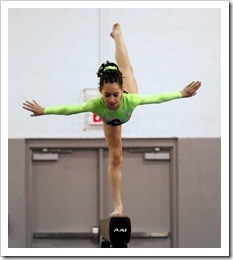 She had met her personal goals for the season and there wasn’t any reason to continue the 4 day regimen and all the expenses that go with it so we let her ‘retire’.

At this level gymnastics isn’t the kind of thing you can take a considerable time off of and then go back to it, so we wanted to keep her in it, albeit at a less stressful level, a while longer just to be sure.

The Coaches agreed we needed to keep her in it. So she moved form the Level 5 Competition team to the Preparatory Optional Team. She can’t compete prep-opt this year because she already competed level 5, but she could still work out with the team two days a week.

Levels 3-6 all do the same routines, the same skills at the competitions. It’s very repetitive and somewhat boring but I understand it. It lays the foundation for future skills.

Molly was clearly bored to death of doing the same thing she did last year. With pre-opt she’s learning new skills and doing things she *thought* she’d be afraid to do when she was in level 5.

She’s now somewhat sad she retired, but understands she wouldn’t be doing the things she’s doing now if she hadn’t. She wants a floor routine, which involves us hiring a choreographer, and she thinks she wants to compete in the optionals next year.