While we live out in the sticks we rarely see deer.  In the 8 years I’ve been here I’ve only seen them near our place one other time.

A couple of days ago we saw one out by the Horses near the burn pile.  We watched it for a while until it finally meandered into the woods.

This morning it was back.

Claudine wondered how close she could get.  So with camera in hand she set out towards it.  Using her Monty Roberts “Horse Whisperer” techniques, she slowly approached and retreated.   It didn’t take long and the little deer was watching her and curious.  It was clear she wasn’t a threat and it eventually walked up to her.  It was alone, and probably looking for someone to hang with.

Eventually she got to pet it (more like rub up against it).

There are more photos in the Deer Gallery.  It was one of those once in a lifetime things.

We kind of hope it sticks around, at least until the garden is planted, then it’s game on if it starts eating the garden.

Last night on a whim we decided to take the girls out to dinner and a movie. Kind of a last minute thing because Michael was gone for the evening.

Because we were being spontaneous we were kind of hosed by the movie times. We had to leave ‘now’ and find somewhere we could eat ‘fast’ to get to the 7:20pm movie.

We didn’t really want fast food, but we also didn’t want to take a chance on going somewhere we’d have to wait, or potentially get bad service which would make us miss the 7:20 showing.

After a little discussion we chose:

Now I had never been there, the kids had and so had Claudine. She warned me that it wasn’t any good, but it was food. It’s pizza for crying out loud. I thought of the saying: “There’s good pizza and great pizza, but never bad pizza. And, never, never, bad free pizza.”

Well, that was proven untrue last night. It was cheap enough, $27 for two adults and 3 kids, but not worth that. The place is a gold mine though, any time you can suck $7 out of people for food who’s ingredients cost about $2.00 or less regardless of how much they eat is a great business model.

I think that was my biggest problem with the pizza. For the most part it was basically cheese and a spattering of one ‘other’ ingredient, maybe two. But none of them really any good. Eatable? yes, but not good. The only good thing was the ‘Cheesy Garlic Bread’ but you can only eat so much of that.

We did end up taking too much time so we had to defer to the 9:40 showing. Which meant after dinner we wandered around Cincinnati Mills for a bit. Maria got to sit and talk with Santa so that was good. For a Saturday night Cincinnati Mills was hurting. There wasn’t anyone there.

We took the kids to see: Mr. Magoriums Wonder Emporium

It was clean, and keeping in mind the intended audience it was probably pretty good.

The ending seemed like they ran out of budget and just decided that they were at a good place to stop. For a rated G flick it was probably OK. B+ at best, more like a B- but the kids thought it was OK.

The tally for tonight’s extravaganza:

Well it didn’t quite take a year, but it seems like it.

We started finishing the attic a while ago. The roof is now completely enclosed, and we cleaned, and cleaned, and painted this weekend. It’s almost ready to move in. This past weekend Claudine too Maria to Vermont to visit relatives. Maggie, Molly, Michael and I attacked the attic ‘trading-spaces’ style.

This was the perfect opportunity. On that show you turn over a room someone who you trust (hopefully). While they are totally changing your room, you have no say in what stays or goes, what they toss, or how things are done. That was the logic behind last weekend. With Claudine out of town, she wouldn’t have any say on what we tossed during the clean out phase or what we painted either.

The photos below don’t do it justice. I didn’t take good photos of all the crap we has stored up there. While we all like the ‘natural’ wood look, the attic isn’t as bright as we wanted, and since we’ll be moving two girls up there, it wasn’t very ‘girly’ either. It turned out really well.

Now we need to tackle the air-conditioning or lack-there-of problem. We’re looking at installing a stand alone PACT unit up there.

More on that later. 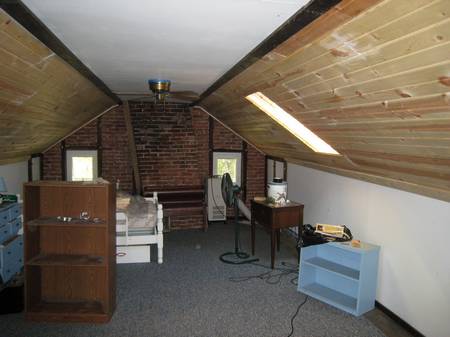 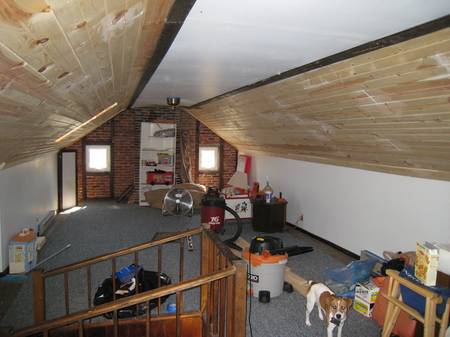 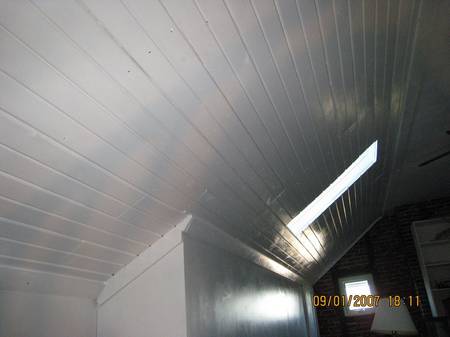 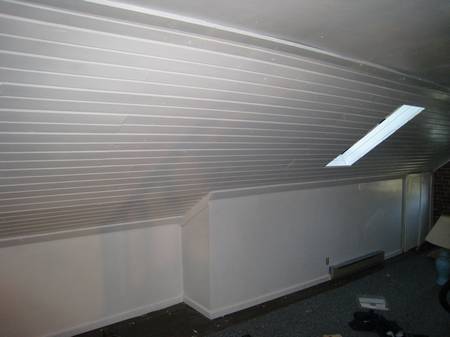 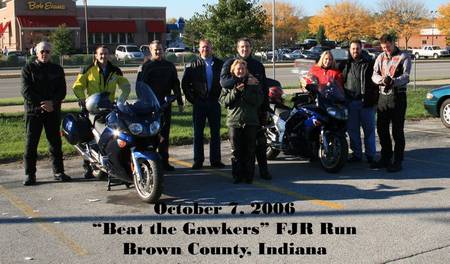 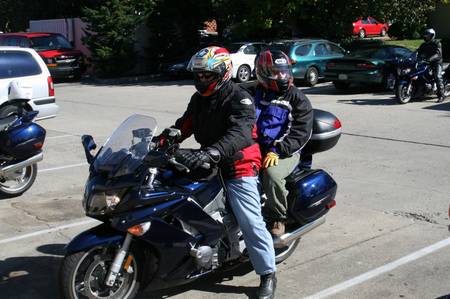 We have 2 horses now. Photos are located above in the Google/Picasa Photo Album

We picked up Blaze who’s name will change though, today in Indiana. He’s a 15ish year old Missouri Fox Trotter just like Cisco. He’s sound and healthy. We brought him home and turned him loose. Cisco was very happy to have a pal to share his new digs with. They did what horses do and felt each other out. It looks like Cisco will remain the top dog or horse for now but Blaze is a very nosey, curious horse.

We had to make a few modifications to the barn. we put up additional railing and a 6 foot gate so that both can come and go as they please in and out of the their stalls and into the dry lot.

Day one went very well. He seems eager to learn and already got a little upset when I took Cisco away from him for a short ride when Claudine was working with him.

Things will be a little more exciting with him around.