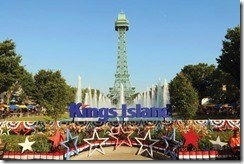 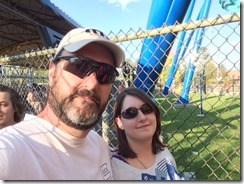 For the 2015 Season, we once again have Season Passes to the great Kings Island Amusement park.  Yep the whole family.

Working directly across the street from it for the last 10 years I’ve only been a handful of times.   We had season passes 18+ years ago when we lived in Landen but not since.

Anyway, turns out they have this “All Season Meal Plan” which you can add to your season pass.  It’s $90 plus tax and you can eat every 4 hours, so basically 2x per day if you’re there all day.    Last year I’m told it had a 2 hour wait period, but they moved that to 4 hours this year.

So what do you get?

At almost every restaurant, or food place, they have combo deals that are on the ”Meal Plan”.  It basically includes an entre of some sort and a side, usually chips or fries.

A burger and fries, a wrap and fries/chips, pizza and bread sticks, chicken fingers and fries.   You get the idea.   Of course no beverage is included.   You can’t include that when a 20oz of something is $4 retail.

Along the same lines *most* of these combo deals are $14-$15 each.     That’s right, two slices of Larosa’s pizza with bread sticks  $15.00.   Buddy is turning in his grave.  Though those combo’s usually do include a drink I think.

So basically, for lunch, I hop on over to KI, and grab a meal.   I can get in an out of there in 40 minutes most days.  Sometimes less, and even ride a ride or two if the lines are short.

It’s early in the game but I’ve been there over 15 times at the time this blog post so I’ve already gotten my money back and the season’s just starting.

Here’s an example of some of the food items:
(These are actual meals that I obtained, your results may vary, it seems the staff is not really well trained on what you get and what you don’t in a lot of places). 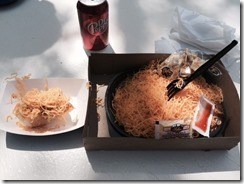 Not the healthiest, but likely the best value in the park. 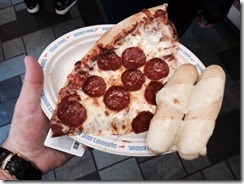 2 Slices and some breadsticks 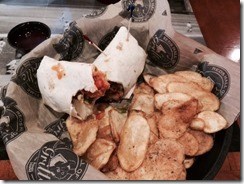 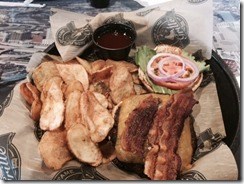 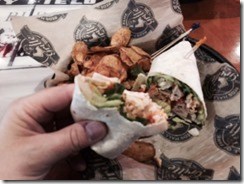 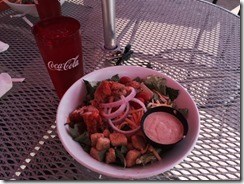 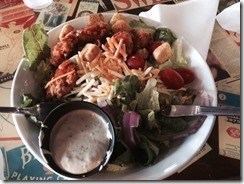 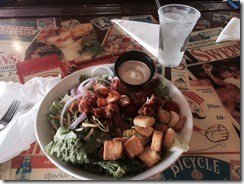 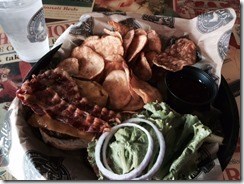 Their Buffalo Chicken Wrap is one of the better meals.  Yes, that’s bacon on my burger, which isn’t part of the deal but if you ask nicely…   The Buffalo Chicken Salad cannot be beat, provided you get the crispy chicken.  The grilled chicken is suspect. 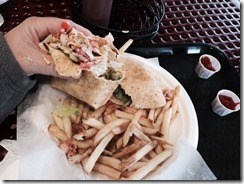 What’s good here is you get to pick what’s in your wrap. 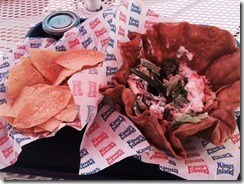 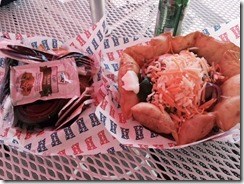 Hank’s is a Chipotle knock off.   Truth is, it’s just plain horrible.   The chicken is not good, the beef is really really bad, and none of it has any flavor.
Technically you’re only supposed to get a Burrito, or Burrito Bowl, or some Taco’s, but those also come with a side of chips and salsa.   The best bet is what you see above the taco salad, which my buddies got all year last year.    While I have eaten it a few times this year, we’ve been told it’s not on the meal plan.   I don’t get it, it’s the same thing a burrito only the tortilla is deep fried, and not very well I might add.

So we’ll see.   I can’t find my photos of the burrito bowl.  I’ve had that twice and if I never had it again I’d be OK with that.

Then again I’d rather eat that then the craptastic food at the Potato Works:

What you see above there is some form of Chicken tender, that’s of lesser quality than a chicken-nugget from McDonalds.   Maybe it’s the gluten free aspect that makes these so horrible, but the alleged chicken inside them wasn’t clearly recognizable as chicken.   On that same day my buddy opted for the corn dog meal deal and it was equally bad.

Also missing photos are:
Chick-fil-A, you can get a regular Chick-fil-A sandwich and large fry.  Yes their waffle cut fries.   This isn’t a horrible deal, but it’s not a lot of food.

There is a Panda Express in the fest-haus.   Which isn’t completely horrible it just depends on how fresh the food is and who’s serving.   The orange chicken is pretty plain, and the king pao is fairly spicy.   But the sides, the egg rolls, and Crab Rangoon’s without crab are pretty nasty.

You can get a 6” Subway sandwich too.   But what we’ve learned so far is that you really need to stay away from the meals that are labor intensive.   Building a 6” sub is hard for a lot of people and the line there isn’t worth the wait.

So I plan to post updates throughout the season.    The plan is to try and eat as healthy as is reasonable.   Chicken Salads, stuff like that when possible.   But a burger and/or pizza will get in there from time to time.   Thankfully the servings aren’t all that large and you end up walking quite a bit to get in and out of the joint.  Literally a mile in and out on a good day.

At last check, I’ve eaten there 32 times.   Money well spent.   We were told recently by an employee there that the average person only uses the meal plan 2.5 times.  (@ $90, that works out to $36 a meal for what could be a $14 meal).   We’re just doing our part to keep them from making obscene profits