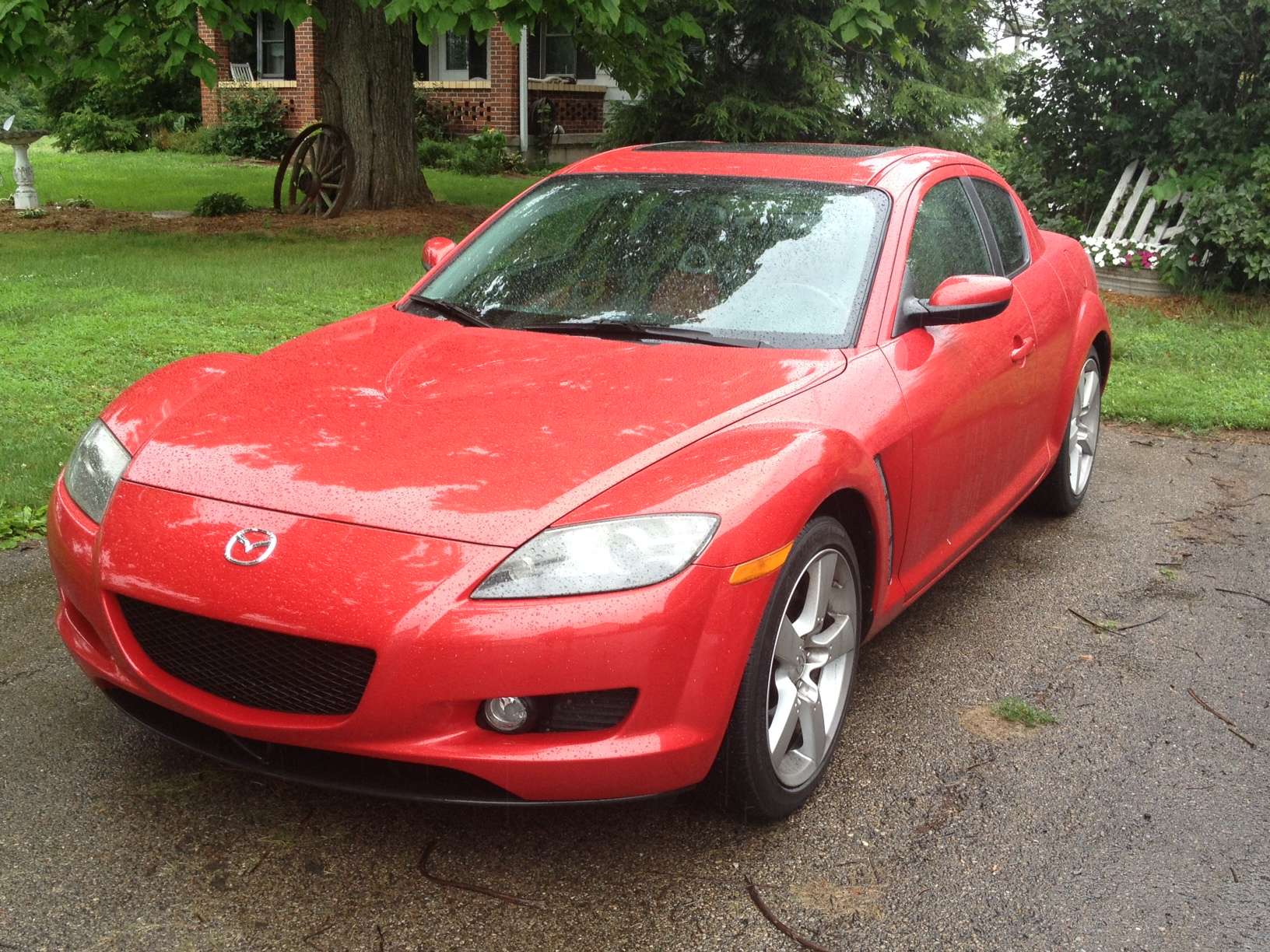 I’m gonna miss this little car, I do already. 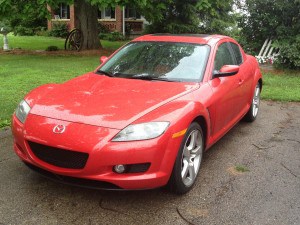 Mods:
As of today, none.

Tires:
I installed Michelin Pilot Sport A/S 3 tires in Nov 2013 in hopes that I’d get better results in winter time.   They are quiet, nice, gripy tires.  Seem good in the rain.   Winter, not so much.  I really need some winter wheels and a good winter non-performance tire.  (Or in reality another vehicle for the winter).
– Update Nov 2016 @ 106k, I stopped in to Tire Discounters to have my tires rotated because I had a vibration and look here: 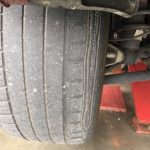 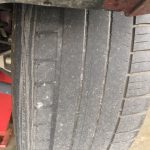 Yowsa, only got about 30K out of those Michelin Pilot Sport A/S 3’s. So they were replaced with Pirelli CINTURATO P7 ALL SEASON PLUS tires.  While not a ‘Sport Tire’, they handle pretty dang well, and considering I’m using this car as my daily commuter, these will hopefully last longer.


Maintenance:
– Regular oil changes before us, and it was just changed at 60.5k
– On 7/4/2013 I put pads on it front/rear.  The high-end ceramics from Autozone (Duralast Gold Cmax, with rubber backing for ultra quiet braking goodness).  I’ll put high performance brakes on it next.   Installation was pretty straight forward, though I had to go ‘borrow’ the magic caliper tool for the rears, the kind that screw in.  The car was exceptionally clean, hasn’t seen many if any winters at this point.  Pads I took off were about 75% done.  They had more life than I expected considering the noise, but we’re good to go now.   Cost:  $100.00 after Michael’s discount, and since these are lifetime, if I don’t upgrade the brakes I should be good to go.  Rotors were perfectly fine.
– Sometime in the summer of 2014 I put a battery in it.  Quite simply the easiest battery I ever replaced.  It’s right there in the center under a cover, in a box.
– I put a clutch in it at 85k miles because it just didn’t feel great to me.  Turns out, after about another 5k miles the clutch is back to feeling how it did before I replaced it.

Retrieved the entire services history from Kings Mazda, they stated that all recalls were up-to-date, and that all warranty items had been fixed.  It appears the motor may have been replaced at 33k miles.  After reviewing the history with the service Manager when having the clutch replaced he clarified that this motor was NOT replace.  QTY=0.

– As of Nov 2016, this car has 106k miles and runs great.  I have not had a compression test done, but it seems to me to be as strong as the day I got it.  It’s a little weaker until it warms up and things are fantastic.  This car does nut currently have a working Catalyic converter.  It has disintegrated and fortunately for me it did not clog. It runs great w/o, though I do have to reset the check engine light every so often for the code: P0420, for Catalyst System Efficiency Below threshold.  I did purchase an aftermarket cat and mid-pipe ($350 delivered) but I’m scared to put it in, seems they only last 30k miles and if clogs, well your motor is ruined.   Same thing can and does happen with a factory cat but they are $1200 and last 80k miles?  Outside of the fumes while sitting at lights some times there’s no other side effect.  That and the occasional back fire when you are in sporty mode with and you down shift and engine brake into a corner, that’s always fun.

– May 2017, at: 110,025 miles, finally got around to the Airbag recall.  As well as some additional service to the tune of $864.00.  This included a front left wheel bearing (complete hub assembly) and left rear wheel bearing.  As well as the Mazda once-over, with oil change and tire rotation.  She was given a thumbs up bill of health.

I tracked mileage for about 5 months, every fill up and I got between 16.5 and 20 MPG with regular driving, mostly around town.   I got up-to 24MPG on trips keeping it around 75 MPH or so.   Yeah, that’s not great for a small car but I knew that going in and it is what it is.   But it’s not the 12-14 MPG that the automatics allegedly get so I’m good with it.  It’s 2x our Excursion’s MPG and that’s what matters.   With gas over $4 a gallon it sucks a little, but at $2 tis just fine.

05/2017 Now featuring 110,025 miles.  Oil consumption is the same, no change in power. Cat is obviously completely gone, so she’s just a tad noisier than before.  I think the unabated heat is starting to get to the mufflers and maybe starting to wear them a bit.

My baby is now on the market being replaced by a 2011 BMW 335i.  My new role requires me to drive further distances than are comfortable in the RX8.  I have driven it on a few of these 500+ mile trips and the seats just simply aren’t conducive for that for a person of my size.

The Clutch in this car was never awesome.  It engaged late in the peddle (almost at the floor), and disengaged late in the peddle (almost fully extended), very mushy which made sporty shifts often difficult.   Over the last month or so it really deteriorated so I figured it was time.  In fact on a really cold -5 degree day it slipped quite a bit so I stopped driving it and started shopping around.   The normal shop that does work I don’t want to do, was hesitant to work on it.  If I had access to a heated garage and lift I’d do it myself, though looking at tutorials, it’s a lot of work.  Lots of stuff  has to come off.

Seems the cost is about $400 for parts, plus a fly wheel if you need it. I decided to let a dealer do it and got a recommendation for Jake Sweeny in Tri-County.  $1800, a loaner car for the day and it’s done.  (They said it might take 3 days but only took one.)

The breakdown on costs are as follows:

I inspected the replaced parts and I was a little disappointed.  The only really bad part was the throw out bearing, but since you’ve got it apart, might as well put new parts in. I probably should have skipped the flywheel.   No doubt you can do this job yourself for about $400-800 in parts depending on the flywheel, but you better have tools, a lift and a warm place when it’s 10 degrees outside.

I also sat down with the service manager and walked through the history with Mazda.  Turns out the QTY field which I didn’t have on the faxed copy of the previous service records indicated that the motor hadn’t been swapped.  QTY = 0.   So that’s good and bad.   Good that it’s original, Good that it still runs great at 85k miles.  Bad that if the life span of these on average is only 100k, well…   Somehow I think I’l get more than that since I keep an eye on the oil, and drive it hard enough to keep it clean and always use good gas.

Other than some stupid dash squeaks, and rattles here and there, I still love my baby.   In fact I’m pretty sure she needs a sibling, a hard-top Miata next year.   Just don’t tell Claudine.

This car is still factory and has no mods other than the scan gauge I use to monitor battery voltage, and engine temp.  Turns out the temp gauge in these is basically an idiot light and over heating them is the absolute worst thing you can do so I added the gauge.  It simply plugs into the ODB port and read reads from the diagnostics.

One Reply to “Mazda RX8 Resources”