This years theme was the Battle for Lexington.

Unlike previous years, this rally would not be a Photo-Bonus Rally.   Meaning you don’t go somewhere, with a flag, and get a picture.  Instead you’ll be answering questions about what’s at the location.   The very first Mason-Dixon I did was mostly this.   You show up at a place, read, for instance the historical marker, and answer a fill in the blank question about the content.

This year however it was worse, way worse and we’ll get into that in a minute. 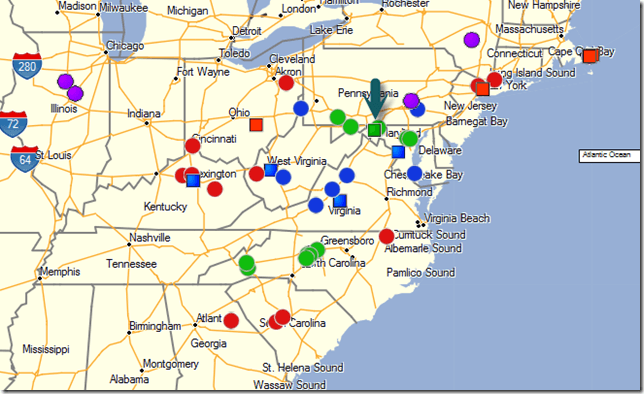 We had the opportunity to visit lots of great places.   In order of importance, the Purple values are the highest, followed by Red, then Blue, then Green.

On the map the circles are available 24 hours, the Squares are defined as daylight ONLY bonuses, and the 3rd type as some sort of time availability.  There were few of these, but they are something like only available Sunday from 10am to 12pm.

Almost all of them have some sort of ‘”Lexington” Tie in.   Maybe they all do but it seemed to me only about half did.

This was the fewest number of boni that I can remember.   After reviewing the data, it became pretty clear, there’s really only one route: 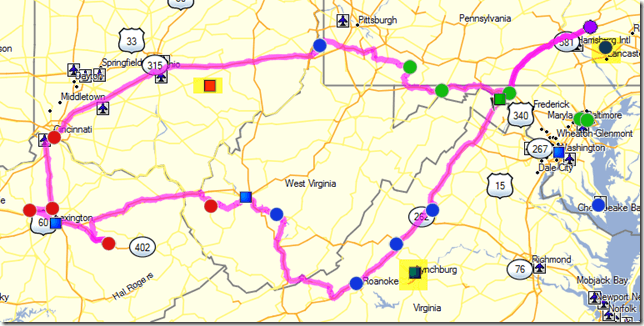 Now one of the things that’s always amazed me about rallying is the different approaches, and different views, and the different ways people get things done.   What I feel is the best route usually isn’t that far off from (quote)The Best Route(unquote).   I said usually.  There have been rallies where we completely missed the obvious, or didn’t think something was possible, yet it got done.

This year the ‘Clear Route’ is what you see above.   You could choose to run it clockwise or counter clockwise.  Each had it’s advantages and disadvantages.   We ran it clockwise.

*Disclaimer:  Clear route to me, is the highest points I could obtain within my riding parameters.  Including MPH average over roads and with the knowledge of the areas we’ll be riding in that I have.  That might not be the same for you, or anyone else.  If you chose a different route because this one wasn’t obvious to you, that’s perfectly acceptable   I’m not saying or trying to say that everyone should have chosen this but cause that’s never the case.

The obvious “wild cards” in my mind off the base route are highlighted.  The winning route got two of them, the upper two.  Because we ran the route the direction we did, the highlighted red Square (Daylight Only) bonus wasn’t available to us as it was the middle of the night when we were riding by.

We ran the route the direction we did for a couple reasons.

1) Riding good twisty roads, the kind we we like, is best done in the daylight hours.   Certainly traffic might slow you down but even with big ass lights, we prefer to ride these in the daylight.

2) We double-stacked the bonus at Jim’s grave.  The winner went there 2nd, then did the loop, then went back to get the second opportunity at the same location.   He rode 1640 miles in 29 hours, we rode 1440.

Now it may not be the right approach, but that’s how I’ve learned to do this.   Take the available riding hours, in this case the rally is a 32 hour rally, minus the mandatory 3 hour rest and you get 29 hours to work with.

Take an average that you’re comfortable riding, knowing the roads, and locations, traffic, times of day, all that stuff, and you get something like this: 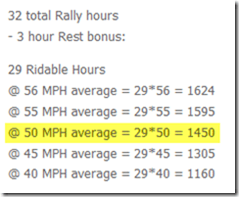 For us, that 50MPH average, that’s TOTAL average, including stops, not just riding average.   For us (me) 50 is a good number.   It represents driving at or about ~5MPH over the limit in the ‘safe zone’.  It’s not crazy.  We know we’ll spend 3-7 minutes per stop.

The Top rally rides don’t spend that much time.  If it’s a photo bonus, they may not even get off the bike.

So we built our route based upon that number 1450 miles was in our “Wheelhouse”.

Given that this was a non-photo bonus rally, meaning you had to read, interpret, think, and write, we expected each stop to take longer, and take longer it did.

The other monkey wrench, is “usually”, when you complete the rally, you have a few hours to get your ‘crap together’ and organize your paperwork.

Not so this year. The rally ended at 2pm, if you got back at 2:01 you were DNF (Did Not Finish), you had to be in line, with paperwork ready to be scored by 3pm.    Ugh, this meant that your paperwork had to be pristine throughout the rally.  Some guys jumped off their bikes and took photos of the stuff to figure out the Q and A later.   I didn’t feel that was the right way to go, given the small paperwork window we had.   Our route was tight enough (for us).  But that’s exactly what the winner did.

This year there were two wild card bonuses. 1) Get a package of un-opened, Pepperidge Farm Lexington Cookies.   2) Get a business card that had the word ‘Lexington’ on it somewhere.

We killed both of those in one stop at Target in Lexington, both the cookies and the card.

So how was this rally different?

As I mentioned earlier, in previous rallies you might roll up to a Highway historical marker something like this:

How far away and in what direction is the home of William Gause Jr.?     And you would write in “four miles south”.

This year, our chief rally bastard did us one better.

Instead of giving us the question, we had a double sided sheet of paper with 48 questions.   So we’d show up, check the rally book, find out that we were at a historical marker, hopefully the right one, read it, then scan the page for the question that fit.  The Question for Bonus location X01 was not Q01, they were all scrambled.

Then scan another page, double sided, with 48 answers and put the two together.

That was bad enough, but some of these bonus locations were simply jacked.  One had us looking for a ‘Sign’, but it turned out we needed to be looking for a Fire Hydrant.

Another was a block away from where the way point that we were provided was.  Yeah, the address was there, but we weren’t provided with a list of addresses to put in our GPS, we were given Lat/Long Info.

Some of the questions and answers weren’t right.  They were close but not right.

I’m not trying to sound bitter, or angry, I’m tired. I recognize the work that goes into this and other rallies and nobody is perfect.  But when we (as riders) are held to a high standard for ‘attention to detail’ and rider comprehension, it’s very frustrating when things that are supposed to line up don’t.

Of course we had the normal Rally bastard Chesedickery, where you’d roll up and there were (4) historical markers you had to read and process at one location, and some of the signs are double-sidded. 🙂   And I know Cheesedickery when I see it because I now have a Masters in Cheesedickery. 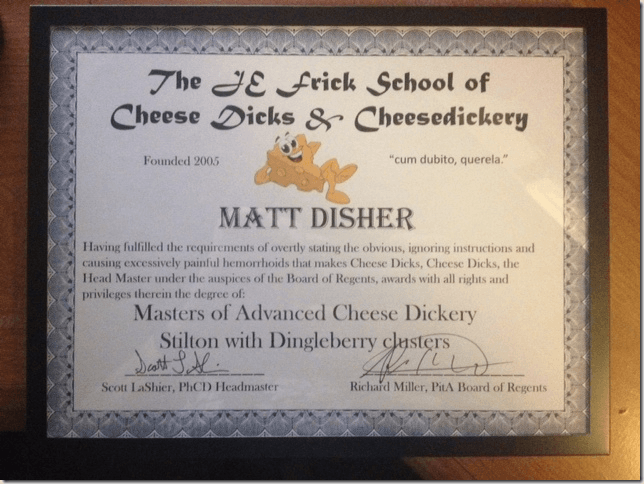 And the best part, we were given this awesome Mug as SWAG: 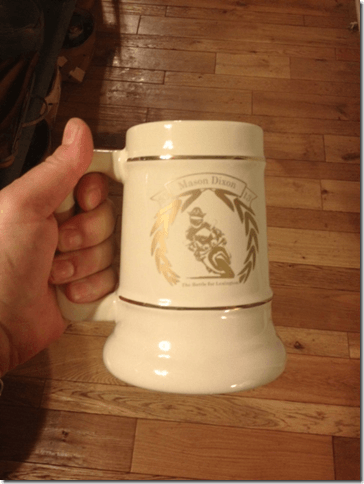 A big ass heavy ceramic mug, a mug that you had to carry with you to get signed at a couple of the locations.  Brilliant!

I don’t know how many folks didn’t get their mug signed because the just left it at the Rally hotel but I’m sure there were a few.

The highest point bonus was in Toluca, IL.   Too far to ride for 1414 points because you’d sacrifice so many others.   But, getting those two wild cards (as most people did) they were able to claim that bonus (and most riders did).

We took a little different approach.  We scanned the questions and found a question that mentioned the Toluca railroad or mine or something.   So we used that Question and use a wild card for the answer, then we went down the list, and eventually found another ~800 pointer that we felt fairly confident we had the right Question/Answer.   So we used that and rolled the dice.  It worked, mostly.

My failure was that I knew the answer, it was actually a Pancake house who’d been serving food since 1937.   That answer was A20, but A21 was what I wrote down.   That mistake alone coast me 66% of those points and 2 or 3 finishing places.

Kyle didn’t drop any points at scoring, and was awarded with the Jim Young Memorial Rider Efficiency trophy which was pretty sweet.

It was another fun rally, the new hotel location worked out well.  Staff was friendly as always.  Next year’s theme is ‘Get Crabby’ or something like that, which means probably a whole lot of east coast stuff.   But then again, I thought the Mountain Doo-Doo was going to be all mountain roads ;0

I continued to be amazed at what people can “Pull-Off”.   Josh (the winner) is a machine, most of the guys that do win this are machines.   They can sit there and twist that.  They  must have huge bladders or a much better strategy for dealing with waste than we do.

We had a great ride.   We planned our ride and rode our plan, minus my paperwork snafu, we got the results we expected.

So until next year…